Inspired by a series of real events and fuelled by secrets from her maternal past: from Michelle’s sighting of a murmuration of starlings on a Suffolk marsh; to the discovery of a battered copy of The Book of Margery Kempe by a 15th Century mystic; to the story of the Wenhaston Doom, a medieval painting of the Last Judgement; to the real-life story of Richard Dadd, the Victorian murderer and artist; this is Michelle Paver’s most evocative and personal masterpiece to date.

In Edwardian Suffolk, a manor house stands alone in a lost corner of the Fens: a glinting wilderness of water whose whispering reeds guard ancient secrets. Maud is a lonely child growing up without a mother, ruled by her repressive father.

When he finds a painted medieval devil in a graveyard, unhallowed forces are awakened. Maud's battle has begun. She must survive a world haunted by witchcraft, the age-old legends of her beloved fen – and the even more nightmarish demons of her father's past.

Spanning five centuries, Wakenhyrst is a darkly gothic thriller about murderous obsession and one girl's longing to fly free by the bestselling author of Dark Matter and Thin Air.

In the shadow of the ancient land, Maud Stearne lives with her family at Wake’s End the house which nudges the nearby water of the Suffolk fen, but which for many reasons stands apart from the landscape, for the house has too many secrets and many dark corners, where glimpses of an evil past sometimes surface.

In 1966, when the story opens, three unusual paintings have been discovered which direct public interest back to Edward Stearne, Mauds’s father, who was incarcerated in a mental asylum for many years. The reason for this curiosity in Stearne’s work becomes apparent as we move back in time to the early part of the twentieth century when Maud was growing up in the shadow of her dictatorial father and beautiful, but totally compliant, mother.

Filled with a wealth of supernatural imaginings and with more than a hint towards the gothic gloom of the Edwardian era, Wakenhyrst is an incredibly detailed story, with a wonderful dark imagery, which immediately places the reader right in the centre of the action. To say I devoured this story is absolutely correct, the place, the people, the inherent danger, all drew me in from the very beginning, and I couldn’t wait to see how the story played out.

There is an undeniable darkness to the story for all is not quiet at Wake’s End and Maud’s childhood is a deeply lonely affair, and whilst she is brutally aware of the undercurrents of the dark and dangerous emotion which plague her parents’ marriage, she finds what comfort she can in the myths and legends of the place she calls home. The stark beauty of the Suffolk fens, and the ancient superstitions which are at the very heart of local folklore are described in such beautiful detail that I could picture myself with Maud in the damp and cold, watching the creeping shadows of the fen come to life as a murmuration of starlings glide and dance in the early evening twilight.

To say much of what happens in the three hundred or so pages of Wakenhyrst would do both the author and the story a complete disservice as this is one of those beautifully plotted stories which takes time to emerge and is all the stronger for taking things slowly.

I’ve now read most of this author’s work, with the exception of her books for children, and I am always aware of how beautifully intuitive her writing is, and how she does her utmost to include the reader every step of the way so that the engagement with the story is utterly consuming from start to finish. There is no doubt that Wakenhyrst is a glorious example of this author writing at her absolute best.

Michelle Paver is an international bestselling author with over 3 million copies of her books sold in 37 countries across the globe. She writes for both adults and children and her work includes two of the most critically and commercially acclaimed ghost stories of modern times, Dark Matter and Thin Air and the prize-winning, million copy selling, children’s series, Chronicles of Ancient Darkness.

Born in Malawi, Michelle Paver came to England as a child. She studied Biochemistry at Oxford University before becoming a partner in a City of London law firm. She began to write after her father’s death prompted her to take a one-year sabbatical. She has never looked back. Known for her extensive research, Wakenhyrst was inspired by the rich and haunting folklore of the Suffolk fens, chance encounters, and both the personal and universal stories of women’s quest for independence. 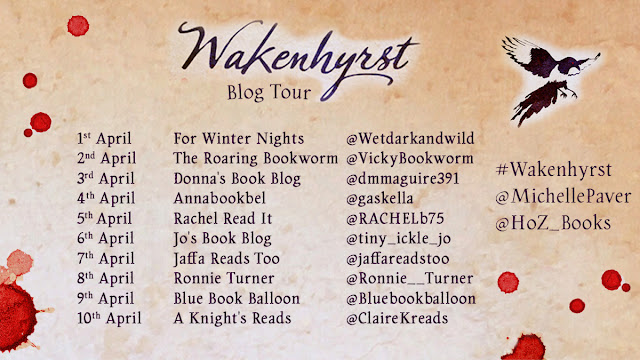