1943: The world is at war, and the villagers of Tyneham are being asked to make one more sacrifice: to give their homes over to the British army. But on the eve of their departure, a terrible act will cause three of them to disappear forever.

2017: Melissa had hoped a break on the coast of Dorset would rekindle her stagnant relationship, but despite the idyllic scenery, it’s pushing her and Liam to the brink. When Melissa discovers a strange photograph of a woman who once lived in the forgotten local village of Tyneham, she becomes determined to find out more about her story. But Tyneham hides a terrible secret, and Melissa’s search for the truth will change her life in ways she never imagined possible.

The Forgotten Village is a time slip novel which is set in the present day and in the latter years of WW2. Melissa Turner is on holiday in Dorset when she visits the forgotten village of Tyneham, there she comes in to contact with the rather wonderful ‘celebrity’ historian, Guy Cameron. On the surface these two young people have nothing in common but the mysterious attraction of the Ministry of Defence village, which has only just been opened to the public, draws them closer and in doing so opens up a secret which as been buried for over seventy-five years.

In 1943, Lady Veronica Standish and her husband, Lord Alfred like the rest of the village of Tyneham are having to pack up and leave the place they have called home as the village has been requisitioned by the Ministry of Defence and given to the troops to help prepare for the D-Day landings. This dark and disturbing time is made all the more poignant by the secrets which surround the relationship between Lord and Lady Standish.

What then follows is a beautifully written dual time story which uncovers a web of dark secrets which have been kept hidden for far too long, whilst at the same time allowing, in the present day, a lovely romantic relationship to develop. The story moves seamlessly between past and present which allows both times frames to sit really comfortably together. I was just as enthralled in the 1943 story as I was witnessing, in the present day, the burgeoning relationship between Melissa and Guy. The author writes really well and there is a lovely authentic feel to the historical aspects of the story.

Sometimes a book comes along at just the right time which fills you with a sense of having read something really accomplished. The Forgotten Village is a really lovely story from start to finish, and I can't wait to see what this talented new author writes next 😊

LORNA COOK lives in coastal South East England with her husband, daughters and a Staffy named Socks. A former journalist and publicist, she owns more cookery books than one woman should, but barely get time to cook. The Forgotten Village is her first novel. 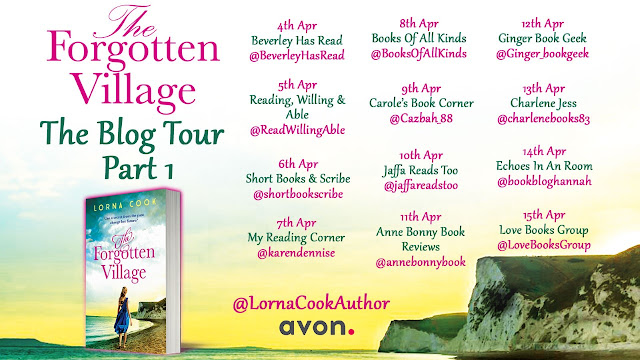