How do you find a killer when you're surrounded by madness?

1935. As Europe prepares itself for a calamitous war, six homicidal lunatics – the so-called ‘Devil's Six’ – are confined in a remote castle asylum in rural Czechoslovakia. Each patient has their own dark story to tell and Dr Viktor Kosárek, a young psychiatrist using revolutionary techniques, is tasked with unlocking their murderous secrets.

At the same time, a terrifying killer known as ‘Leather Apron’ is butchering victims across Prague. Successfully eluding capture, it would seem his depraved crimes are committed by the Devil himself. What links him with the insane inmates of the Castle of the Eagles?

Only the Devil knows. And it is up to Viktor to find out.

In 1935, something quite evil lurks within the confines of Hrad Orluͦ a mental asylum deep in the heart of a Czechoslovakian forest, a place known locally as Castle of the Eagles.

Incarcerated within the walls of the castle are the Devil’s Six, a group of patients who are so inherently evil they need to be kept in total isolation. Viktor Kosárek is a newly appointed clinical psychiatrist who has a specific interest in finding out just what secrets make the Devil's Six so very evil.

Miles away in Prague, detective Lucás֒ Smolák leads an investigation into the hunt for a serial killer, known as Leather Apron, who seems to be targeting women, and whose macabre modus operandi is reminiscent of the Victorian serial killer known as Jack the Ripper.

Both these very different worlds collide in a disturbing way way and the author certainly cranks up the tension in a story which isn’t afraid to shock. The general unease of living in Europe on the cusp of war is perfectly highlighted but it is in the details of the hunt for the murderer and the horrifying events which happen in the mental asylum where the story becomes compelling reading.

The short and snappy chapters, and the way the story alternated between the events unfurling in the castle and the horrific murder details in the city of Prague, kept me on my toes and I enjoyed trying to keep one step ahead of the action. However, both elements are equally dramatic and to be fair, not for the faint hearted.

The Devil’s Aspect is a difficult book to enjoy as it covers some pretty horrific subjects, which won’t appeal to everyone, but if you like well researched historical mysteries with a really dark edge then this book is certainly one to hold your attention.

Craig Russell’s novels have been published in twenty-five languages, four have been made into major films in Germany, in one of which he has a cameo role as a detective. He has won the CWA Dagger in the Library and the McIlvanney Prize, for which he has been shortlisted another twice, and has previously been shortlisted for the CWA Golden Dagger, the Ellis Peters Historical Dagger, and the SNCF Prix Polar in France. A former police officer, Craig Russell is the only non-German to have been awarded the Polizeistern – the Hamburg Police’s Police Star. 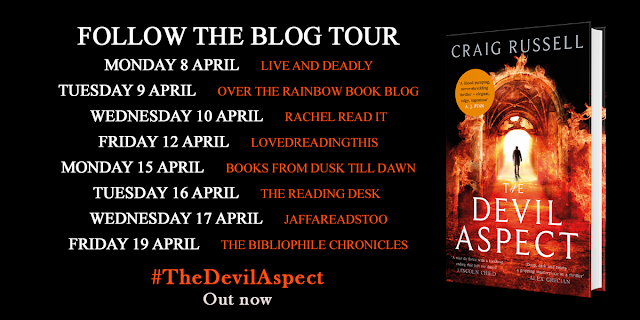