Blog Tour ~ No Way Out by Cara Hunter

It's one of the most disturbing cases DI Fawley has ever worked.

The Christmas holidays, and two children have just been pulled from the wreckage of their burning home in North Oxford. The toddler is dead, and his brother is soon fighting for his life.

Why were they left in the house alone? Where is their mother, and why is their father not answering his phone?

Because this fire wasn't an accident.

A devastating fire rips through an Oxford house, leaving a trail of destruction, and both the fire and the police services have their work cut out trying to piece together the sparse clues which the fire has left behind. DI Adam Fawley and his investigative team start a complicated investigation to track down the parents of two small children who were pulled from the wreckage of the fire.

The story pulls you in from the dramatic start which it is particularly emotional as it shows this unknown family at their most vulnerable, I especially enjoyed the countdown to the event which explains what's been happening to the family in the months before the fire devastated the family home. The police procedural aspect of the story is as tight and tense as ever and, as we have come to expect in the series, the author really cranks the tension to high as the team race  against time to discover just what went so badly wrong for the family involved in the house fire.

No Way Out sees the welcome return of this team of intrepid crime investigators and it was good to meet up with them in the aftermath of the previous story in which some of the crew suffered more than others. As always, they work well together however this investigation is especially challenging as they have so little evidence to go on, and seem to be thwarted at every turn.

This is now the third DI Adam Fawley thriller and I've followed this series from the start. There's no doubt that each book is as strong as the one before and whilst it's possible to read each as a standalone, it does work best to read from the start, that way you get to know the CID team really well and come to understand all their faults and foibles.

The author has certainly made her mark on this genre as her crimes stories are now really popular, and rightly so, as she is such a talented writer whose stories captivate from the start. The ending of No way Out certainly ends on a bit of a cliffhanger, so I really can't wait to see what happens next for DI Fawley and his team.

Cara Hunter is a writer who lives in Oxford, in a street not unlike those featured in her series of crime books. Her first book, Close to Home, was picked for the Richard and Judy Book Club and this is her second featuring DI Adam Fawley and his team of detectives. 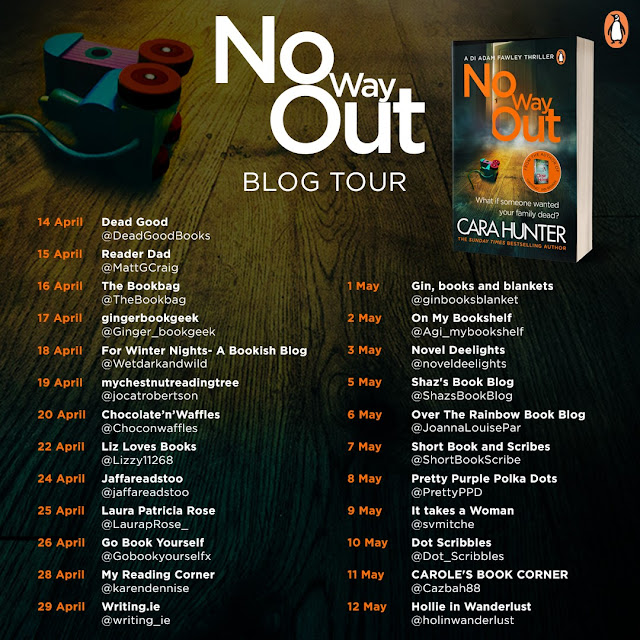