Harry Fletcher is a confident young man, sure that he will marry Nora, no matter what their families say. He will always protect Eddie, the boy his father saved from the gutters of Port Adelaide.

From the beaches of Semaphore to the shores of Gallipoli, the mud of Flanders to the red dust of inland South Australia, this is a story of love, brotherhood, and resilience.

We owe such a huge debt of gratitude to those service men and women from around the British empire who came to our aid in WW1. Harry Fletcher and his adopted foster brother Eddie are just two ordinary young men from Semaphore, a quiet town in Australia, who left their shores in a flurry of patriotic duty, only to find themselves amidst the horror of a theatre of war which showed them no mercy. From Gallipoli, to Flanders, Harry and Eddie prove to be an invincible team but, as they find out to their cost, war has a tenacity to throw in a few unexpected surprises.

The Stars in the Night created a realistic portrait of  war and the story gave a sense of just what it was like to be away from home, waiting for news from family, and hoping that your sweetheart would still be there for you when it was all over. By using both narrative and epistolary/diary entries a story emerges of two incredibly brave young men, who, with characteristic stoicism, and a lively outlook, took on board everything the war threw at them.

The author has obviously done a great deal of historical research and paints a realistic portrait of wartime without ever resorting to too much graphic detail and yet, both the horror and the emotional impact of grief and loss certainly comes across. There were times within the story when I felt that emotion and, without giving anything of the plot away, I had to wipe away a tear or two on more than one occasion.

The Stars In The Night is beautifully written with a strong sense of wartime camaraderie and brotherhood, not just between Harry and Eddie who are quite special characters, but also between those soldiers who, regardless of rank, were all in it together. I think this passage from the book sums up so succinctly the effect of the war... "Quite a few fellows never made the next roll call. We couldn't always work out where they had ended up. But it was, like, just something that happened. Nothing special. We just got on with it."

From its evocative cover, to the very last sentence, The Stars In The Night is one of those stories which stays with you long after the last page is turned. 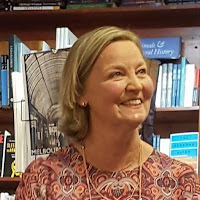 Clare completed her PhD in Australian WWI literature at the University of Melbourne in 2011, and a Masters of Creative Writing in 2008, in which she investigated the history of her grandparents who emigrated for Europe to Port Adelaide in January 1914. The Stars in the Night is the result of her research.

Giveaway to win a signed copy of The Stars in the Night, a metal poppy brooch made by a Melbourne craftswoman, and a cross-stitch poppy card. (Open Internationally) 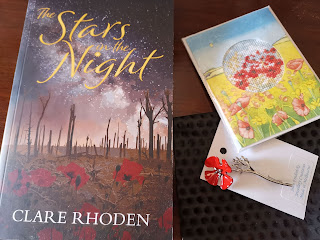 The winner will be selected at random via Rafflecopter from all valid entries and will be notified by Twitter and/or email. If no response is received within 7 days then Rachel’s Random Resources reserves the right to select an alternative winner. Open to all entrants aged 18 or over. Any personal data given as part of the competition entry is used for this purpose only and will not be shared with third parties, with the exception of the winners’ information. This will passed to the giveaway organiser and used only for fulfilment of the prize, after which time Rachel’s Random Resources will delete the data. I am not responsible for despatch or delivery of the prize.