An elderly resident of an inner-city tower block is brutally attacked and left for dead. Her neighbours, a pregnant alcoholic, a vulnerable youth, a failed actress and a cameraman with a dark secret, are thrown together in their search for answers. Misfits and loners, they are forced to confront uncomfortable realities about themselves and each other, as their investigation leads them towards the shocking final.

When an elderly resident of a high rise block of flats is attacked in her home, her neighbours, who don't really know one another, come together to try to find out who could have done this dreadful act. The neighbours aren't without their own problems and yet, as they get to know each other, they find that along with trying to solve the crime, they are also finding something really worthwhile in their developing friendship.

I've enjoyed spending time with the people of The Lonely Hearts Crime Club, they made me laugh sometimes but mostly I was intrigued by how cleverly the author blended their many differences and made them into a cohesive whole. There's a lot going on in the plot and once I'd got all the characters placed in my head, I found that the story fairly zipped along and I enjoyed observing the numerous twists and turns which kept me guessing.

I liked the author's light and easy style of writing and the way that she brought everyone to life and explained all their different faults and foibles. The mystery at the heart of the plot is nicely revealed and I found this interesting however, I think what worked for me was the canny observations about mental health issues, addictions and loneliness which made the story all the more poignant in places. 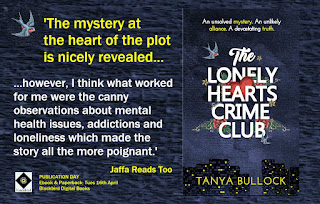 Tanya Bullock is a college lecturer, writer and award-winning filmmaker. She lives in the West Midlands with her husband and two young children. 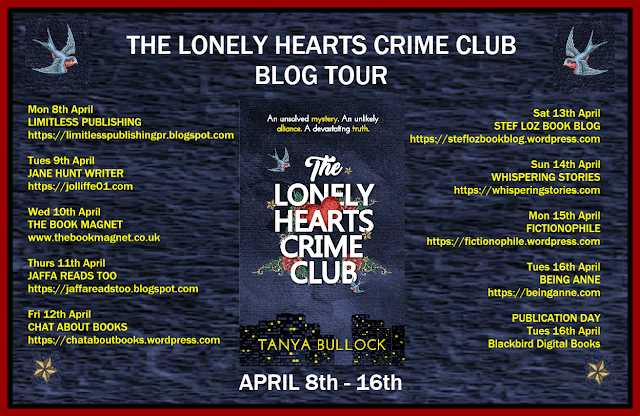