Blog Tour and Giveaway ~ Lies Behind the Ruin by Helen Matthews

Emma Wiltshire has overcome plenty of obstacles in her life. From student bride to single mum of a son, Owen, but she has found happiness with her second husband, Paul and another child, Mollie. Emma's dark days seem far behind her until a fatal accident happens at Paul's work and he is held responsible.

On holiday in France, Paul's behaviour turns erratic. On impulse, he buys a cheap, dilapidated property and, to Emma's dismay, persuades her they can renovate it into a holiday home.

Back in England, their problems spiral out of control. Escape to a new life in France seems the only solution but with heart-breaking loss for Emma. As the couple strive to renovate their ruin and open a small business, shadows from the past threaten their happiness and safety. Because, how can you build a new life on toxic foundations?

Emma Wiltshire and her husband, Paul seem to have a modern marriage, and whilst it's not perfect, generally they seem to be muddling along, both dealing with work and children. When Paul encounters pressures at work, the idea to move to rural France becomes a tantalising option. However, whilst buying a run down French farmhouse, seems to be the answer to their problems, it only serves, in a way, to reveal deep cracks in Emma and Paul's relationship, which threatens to pull them apart. The family's escape to the rural idyll of the French countryside is handled really well and I found that I could easily picture Sainte Violette with its rustic charm which is so reminiscent of the gentle atmosphere of isolated French villages, and with the inhabitant's natural reticence towards strangers.

Lies Behind the Ruin is a really fascinating look at the unpredictability of relationships and of what happens when one partner is keeping devastating secrets from the other. And yet, the story is not just about the relationship between Emma and Paul, there's also some issues around parenting and joint responsibilities, but I think what also worked well was watching just how Emma coped with whatever life threw at her.

The author has a lovely observational style which is both entertaining and easy to read and  yet, the dark mystery at the heart of the novel has an edginess which helps to keep a heightened level of tension throughout the story. I really enjoyed the way the story flipped seamlessly between characters which allowed us an intimate glimpse at what was going on, and as the deadly secrets are gradually revealed, so the toxicity of this marriage starts to be revealed.

Lies Behind the Ruin is a polished and highly commendable novel about the complexities of family life and of what happens when everything starts to disintegrate. This is the first book I have read by this author but, after finishing, Lies Behind the Ruin, I'm keen to read more. 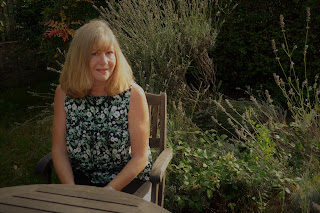 Helen Matthews is the author of Lies Behind the Ruin, a contemporary suspense novel set in France, to be published in April 2019 by Hashtag Press. Her debut novel After Leaving the Village, published in 2017, won first prize for the opening pages of a novel at Winchester Writers’ Festival. Born in Cardiff, she read English at the University of Liverpool and holds an MA in Creative Writing from Oxford Brookes University. Helen’s short stories and flash fiction have won prizes and been published in Reflex Fiction, Ad Hoc, Artificium, Scribble and Love Sunday. Her freelance journalism has been published in the Guardian and broadcast on BBC radio. She is an ambassador for Unseen, a charity that campaigns to end human trafficking and modern slavery.

*Terms and Conditions –European entries welcome. Please enter using the Rafflecopter box below. The winner will be selected at random via Rafflecopter from all valid entries and will be notified by Twitter and/or email. If no response is received within 7 days then Rachel’s Random Resources reserves the right to select an alternative winner. Open to all entrants aged 18 or over. Any personal data given as part of the competition entry is used for this purpose only and will not be shared with third parties, with the exception of the winners’ information. This will passed to the giveaway organiser and used only for fulfilment of the prize, after which time Rachel’s Random Resources will delete the data. I am not responsible for despatch or delivery of the prize.