Hollywood, 1938: As soon as she learns that M-G-M is adapting her late husband’s masterpiece for the screen, seventy-seven-year-old Maud Gage Baum sets about trying to finagle her way onto the set. Nineteen years after Frank’s passing, Maud is the only person who can help the producers stay true to the spirit of the book—because she’s the only one left who knows its secrets.

But the moment she hears Judy Garland rehearsing the first notes of “Over the Rainbow,” Maud recognizes the yearning that defined her own life story, from her youth as a suffragette’s daughter to her coming of age as one of the first women in the Ivy League, from her blossoming romance with Frank to the hardscrabble prairie years that inspired The Wonderful Wizard of Oz. Judy reminds Maud of a young girl she cared for and tried to help in South Dakota, a dreamer who never got her happy ending. Now, with the young actress under pressure from the studio as well as her ambitious stage mother, Maud resolves to protect her—the way she tried so hard to protect the real Dorothy.

There's something special about The Wizard of Oz and whilst I remember being really scared of the wicked witch of the west and her flying monkeys in the MGM movie, I can still recall that magical feeling as Dorothy and her three companions travel along the yellow brick road towards the Land of Oz.

In Finding Dorothy we learn not just about the way the movie evolved some twenty years after the author L.Frank Baum's death, when as an author he was largely forgotten, but also about the relationship between Frank and his wife Maud during their life together. Narrated by Maud Baum we learn of the back story to the author's inspiration for his series of Oz novels and we are also given an all access pass to the 1938 Hollywood set of the movie as Maud goes behind the scenes, desperate to make sure that Dorothy's character is brought to life by the young actress who has the huge responsibility of creating an authentic Dorothy who is true to her husband's vision.

The author has captured time and place perfectly and even if you aren't a fan of the movie the story reads like a wonderfully detailed historical novel. Travelling from the mid-1800s in an America that was on the cusp of great change, to the golden age of the Hollywood movie industry in the late 1930's, when all was not as glittery gold as it seemed on the big screen.

A clever blending of fact and fiction brings Finding Dorothy to life in such a special way that it's difficult to now imagine the movie without the snippets of information I have discovered by reading this lovely story. The yellow brick road was a bumpy ride in many respects but there's no doubt that the Wizard of Oz's lasting legacy of hope and magic will be with us forever.

Elizabeth Letts is the #1 New York Times bestselling author of The Eighty-Dollar Champion and The Perfect Horse, which won the PEN Center USA Literary Award for research nonfiction, as well as two previous novels, Quality of Care and Family Planning. She lives in Southern California. 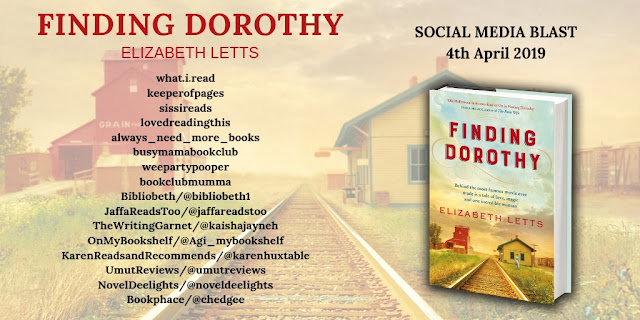