Jaffareadstoo is thrilled to be part of the Sleep Blog Tour

All Anna wants is to be able to sleep. But crushing insomnia, terrifying night terrors and memories of that terrible night are making it impossible. If only she didn’t feel so guilty…

To escape her past, Anna takes a job at a hotel on the remote Scottish island of Rum, but when seven guests join her, what started as a retreat from the world turns into a deadly nightmare.

Each of the guests have a secret, but one of them is lying – about who they are and why they're on the island. There's a murderer staying in the Bay View hotel. And they've set their sights on Anna.

Someone’s going to sleep and never wake up…

The million-copy bestseller is back in her darkest, twistiest book to date. Read it if you dare!

The Scottish island of Rum seems like the ideal place for Anna to escape to after a dreadful accident which has ruined her life, however, whilst the idyllic Bay View Hotel offers her a refuge, the arrival of a group of seven holidaymakers alters the status quo until the hotel becomes less of a retreat for Anna and more of a never ending nightmare.

What then follows is probably one of the most convoluted stories I have read in a long time. It's incredibly atmospheric, with an isolated hotel and things that go bump in the night, an horrendous storm and a group of damaged individuals, what could possibly go wrong !

There's no doubt that this author really knows how to draw in her audience, and as I was reading Sleep I was reminded of those classic Agatha Christie novels where there's been a murder in the library and no-one is going to get out alive! And such is the creeping tension and the heightened awareness of doom that I really couldn't put the book down until I had discovered just what was going on at the Bay View Hotel and believe me, there's an awful lot going on.

Sleep is a really cleverly put together thriller which once started you can't stop because at its heart is the story of seven fascinating people who have all been changed by life events, and it's only when something devastating happens at the start of the story, which acts as a catalyst, and then the whole thing takes off in an absolute roller coaster of a psychological thriller.

There is no doubt that this author has this genre absolutely cracked. There's never a word wasted, an emotion unexpressed or a terror unexplored in stories which grab your attention from the very first  page and which play with your emotions right to the very end.

Bring on the next one 😊

C L Taylor is a Sunday Times bestselling author. Her psychological thrillers have sold over a million copies in the UK alone, been translated into over twenty languages, and optioned for television. C L Taylor lives in Bristol with her partner and son. 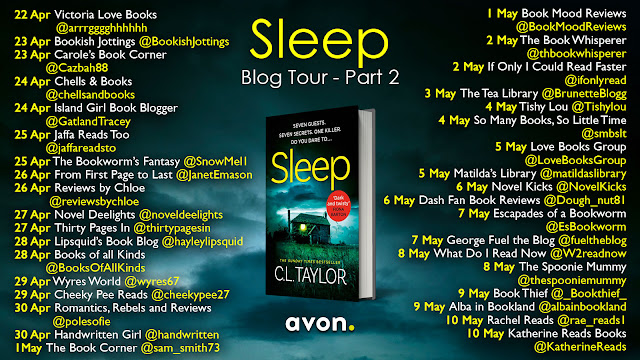