Stitch by perfect stitch, Andrew Garvie makes exquisite dolls in the finest antique style. Like him, they are diminutive but graceful, unique, and with surprising depths. Perhaps that's why he answers the enigmatic personal ad in his collector's magazine.

Letter by letter, Bramber Winters reveals more of her strange, sheltered life in an institution on Bodmin Moor, and the terrible events that put her there as a child. Andrew knows what it is to be trapped, and as they knit closer together, he weaves a curious plan to rescue her.

On his journey through the old towns of England, he reads the fairy tales of Ewa Chaplin--potent, eldritch stories which, like her lifelike dolls, pluck at the edges of reality and thread their way into his mind. When Andrew and Bramber meet at last, they will have a choice--to break free and, unlike their dolls, come to life.

Andrew Garvie has liked dolls ever since he saw Marina Blue sitting in the shop window just before his seventh birthday. And what then started was, for Andrew, a complete obsession with dolls of all shapes and sizes, both antique and modern. When he answers an advert and starts a correspondence with a young woman with the glorious name of Bramber Winters, he realises that he has found a kindred spirit.

What then follows is a really unusual but beautifully atmospheric love story which looks at what it's like to be different in a world which doesn't always understand diversity. Both Andrew and Bramber have their own special difficulties which are sensitively explored and as we discover more about them as people, so the story of the doll maker becomes all the more persuasive.

The Dollmaker is not always an easy read as it's sometimes quite dark, however the lyricism of the writing is convincing, being part fantasy, part magical realism, and always with a tantalising glimpse of a hidden obsessive world in which Andrew and Bramber are the only two participants. I was especially impressed with the way the story is constructed, with chapters which are individually very different and yet, which reveal completely both Andrew and Bramber's stories, and yet, there's also the inclusion of several complete fairy stories by the author Ewa Chaplin, who features somewhat ethereally in the story, but whose influence, nevertheless dominates.

The Dollmaker is quirkily different with a unique style which may not appeal to everyone but which kept me entertained from start to finish.

Nina Allen is a novelist and short story writer. Her previous fiction has won several prizes, including the British Science Fiction Award for Best Novel, the Novella Award and the Grand Prix de L'Imaginaire for Best Translated Work. She lives and works in Rothesay, on the Isle of Bute. The Dollmaker is her third novel. 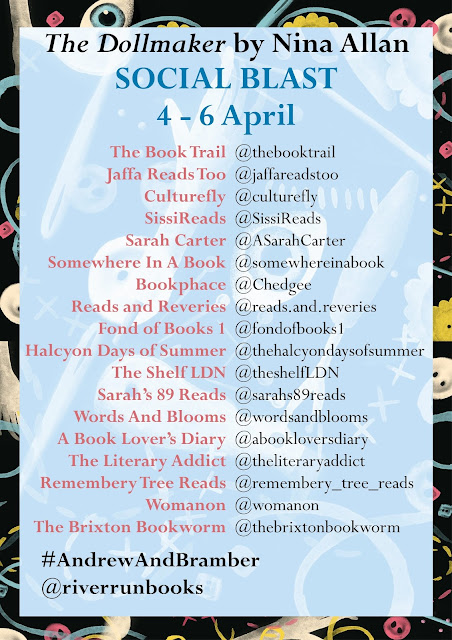