Hi Harriet, welcome back to Jaffareadstoo, it's lovely to have you back to talk about your latest novel, Passage from Nuala.

Passage from Nuala is now the sixth book in your crime series set in 1930’s Ceylon. When you wrote the first book, Trouble in Nuala, in 2016, did you expect to go on to write a long running series? 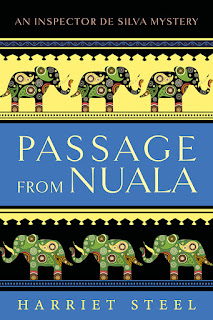 The number 7 has a bit of a history as a magic number in literature, for example the seven Chronicles of Narnia or the seven Harry Potter books, and I used to joke that I was aiming for seven books in my series. In truth, I must admit that I was far from convinced that I’d come anywhere near that, but I’ve grown very fond of my characters and many readers say they feel the same, so that has spurred me on. The other day, a reviewer on Amazon challenged me to match Alexander McCall Smith whose No 1 Ladies Detective Agency Series is about to reach its twentieth instalment. I’m still mulling that one over!

What can you tell us about this latest book that won’t give too much of the plot away?

Shanti wants to treat Jane to a holiday, and they set off on a cruise to Egypt to visit Cairo and the pyramids. They plan to enjoy a relaxing change from home, but trouble isn’t long coming. When a journalist is found dead, killed by newspaper thrust down his throat, it’s back to work for Shanti and Jane. In the enclosed world of the cruise ship, there are plenty of potential suspects ranging from an arrogant wealthy woman; a mismatched couple, who are recently engaged; a flamboyant singer, and a romantic novelist. All of them have secrets to hide. Can Shanti and Jane uncover the truth and salvage their holiday into the bargain? Like the other books in the series, Passage from Nuala is designed to provide an absorbing but relaxing read in a colourful setting. It can be read as a standalone novel or as part of the series.

Inspector Shanti de Silva is the main protagonist of your novels, what can you tell us about him, and have you noticed any changes in his character since the start of the series?

He’s pragmatic but principled with a dry sense of humour. Happily married, he likes books and gardens as I do. There are so many murder mysteries around that feature detectives with messy private lives. I wanted Shanti to be quite a conventional man who must deal with abnormal situations as part of his job. However, his private life isn’t entirely conventional – his wife Jane is an Englishwoman, and they’ve had to negotiate the problems that a mixed marriage would have raised in a colonial society.

I think the main changes that have occurred over the series come from Shanti’s developing relationships within the British community, particularly his boss, Archie Clutterbuck, and in my latest book, Archie’s own boss, William Petrie. Shanti has had to tread carefully when handling his colonial masters, but he’s managed to establish an increasing rapport with them. This may have been made easier by the fact that Nuala’s society is small compared with what he had to contend with in Colombo.

The series has, so far, focused on quite a wide variety of crimes, what do you think makes a good fictional villain and detective?

That’s a very interesting question. As a writer of cosy crime that veers towards the traditional, or Golden Age style, end of the spectrum, I need to be attuned to what my readers find acceptable, so serial killers and psychopaths are out. A good villain can, and perhaps should, have likeable qualities, so that hopefully, when the twist comes, and he or she is revealed, the reader won’t have guessed who they are ages ago. They need to be clever and resourceful enough to inspire respect, both from the reader and the detective, and they need to have strong motivation for their crime. It’s not enough for them to do evil simply because they are evil.

As far as a good detective goes, again, a dysfunctional character wouldn’t fit with the ethos of my kind of murder mystery, unless they were dysfunctional in a kooky, humorous way. I think the qualities needed are not dissimilar to those required for a good villain, without the murderous intent of course.

Where do you get your inspiration for the stories, and, as one book ends, do you already have the idea in place for a new story?

My travels in Sri Lanka, formerly Ceylon, provided the initial inspiration for the series. It’s a fascinating and beautiful country. Even though the tone of the series is essentially light, its colonial past and the tensions that must have created adds, I hope, an extra layer of interest.

I usually have a future book in mind by the time I finish the current one. Sometimes, as with Passage from Nuala, an event or a book gives me an idea. With Offstage in Nuala, for example, it was Shakespeare Wallah, Felicity Kendall’s memoire of touring India with her theatrical family. The recent exhibition at the V & A Museum about the great days of cruise liners provided a lot of colour and ideas for Passage from Nuala. 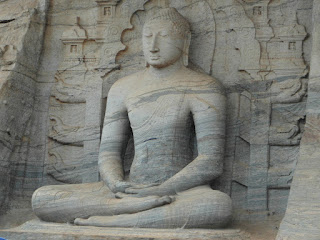 And finally, what do you hope readers will take away from your Inspector de Silva mysteries?

You can find out more about the author on her blog

Huge thanks to Harriet for being my guest on the blog today and for bringing Inspector de Silva's world to life so perfectly.