Today my Author Spotlight in on Marie Macpherson..... 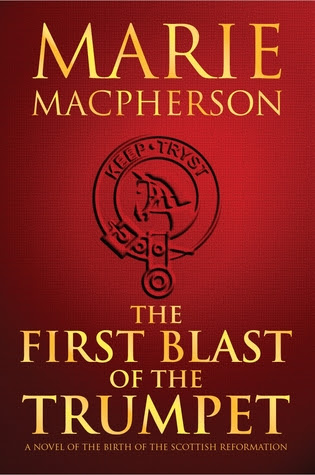 Hailes Castle, 1511. Midnight on a doom-laden Hallowe'en and Elisabeth Hepburn, feisty daughter of the Earl of Bothwell, makes a wish ― to wed her lover, the poet David Lindsay. But her uncle has other plans. To safeguard the interests of the Hepbum family she is to become a nun and succeed her aunt as Prioress of St. Mary's Abbey, Haddington.

However, plunged into the political maelstrom and religious turmoil of the early Scottish Reformation, her life there is hardly one of quiet contemplation. Strong-willed and independent, she clashes with those who question her unorthodox regime at St. Mary's, including Cardinal David Beaton and her rival, Sister Maryoth Hay.

But her greatest struggle is against her thrawn godson, John Knox. Witnessing his rejection of the Roman Catholic Church ― aided by David Lindsay ― she despairs that the sins of her past may have contributed to his present disenchantment.

As he purges himself from the puddle of papistry, Knox finds his voice, denouncing everything he once held dear, but will that include his godmother, Prioress Elisabeth? And by confessing her dark secrets, will Elisabeth steer Knox from the pernicious pull of Protestantism or drive him further down the fateful path he seems hell-bent on; a path that leads to burning at the stake?

In a daring attempt to shed light on a wheen of unanswered questions about John Knox's early, undocumented life, this novel throws up some startling claims and controversial conjectures.

Marie - welcome to our blog and thank you for taking the time to answers our questions about
The First Blast of the Trumpet.


Tell us a little about The First Blast of the Trumpet, and why you were inspired to write this story?

Very briefly, The First Blast of the Trumpet is a fictional account of the early, relatively unexamined life of the Scottish reformer, John Knox. I must admit I never set out to write about such a controversial character for I was more fascinated by the tragic romantic figure of Mary Queen of Scots. But while researching the Treaty of Haddington that betrothed her to the French dauphin, I stumbled across Knox who, toiling at the oars as a galley slave, may even have rowed her to France. This possible coincidence was too tempting to ignore and set me off on my own journey of discovery to uncover more about Haddington’s most famous son and the Founding Father of the Scottish Reformation.

What first surprised me was not only how little was known about Knox’s early life but how little had been written about him in general. Perhaps writers are afraid to tackle this ‘sacred cow’, which is ironic considering Knox’s attitude towards holy icons! Also there was a lot of misinformation about him. For example, I’d assumed that the man who wrote the polemical pamphlet, The First Blast of the Trumpet against the Monstrous Regiment of Women must have been a rampant misogynist but the title is misleading. In his attack on the ‘monstrous’ – that is to say ‘unnatural’ – rule of Catholic female monarchs of the time, he does denigrate women as inferior beings but, to be fair, he was only voicing what most men at the time believed. In fact, as his correspondence shows, Knox admired and respected women: he was married twice and other men’s wives left their husbands to follow him. So finding out that the pulpit-thumping tyrant was not a woman-hater but clearly had great charisma was indeed surprising. John Knox – ladies’ man? This merited further investigation.

The First Blast of the Trumpet contains a rich Scottish vernacular - how important was it for you to keep the integrity of the story without compromising readability?

I have to admit I felt I’d compromised my integrity when I gave in to a request from a publisher’s reader to substitute the Scots vernacular with Standard English. I spent ages rewriting – with a sinking heart it has to be said – for it had been a labour of love researching 16th century literature, including poetry, ballads and songs for authentic vocabulary. Besides, Scots was the language I heard my characters speaking! It didn’t sound the same at all so I was delighted when the publisher apologised and asked me to put it all back in. For, in losing the Scots language, my story had lost its originality, its voice and they, too, realised just how important it was to its uniqueness, its integrity. Now I’d defend the use of Scots and argue (and here’s the language teacher speaking!) that it’s not necessary to know the exact meaning of every word and phrase as long as they can be understood from the context.

If you could meet three characters from your book - who would you choose and why.

First off it would have to be Prioress Elisabeth Hepburn, who must have been a real feisty dame! Reluctant nun with a shady past – what a tale the Jaggy Thistle, as I affectionately call her, could tell!

I’d also want to quiz Knox about his life before he left the RC Church and find out what secrets he wanted to keep hidden and why.

I’d loved to have attended the first performance of Sir David Lindsay’s theatrical masterpiece, Ane Satire of the Three Estates. What a storm this scathing attack on the Roman Catholic Church must have caused at the time! It’s a wonder he wasn’t arrested for treason.

Is there a tantalising teaser you can offer us about book two in the series?

'The Second Blast’ explores a complicated love triangle. I'm intrigued by Knox’s tortuous relationship with Elizabeth Bowes, an ardent follower, whose 16 year-old-daughter Marjory married the forty-year-old preacher. How I’d love to be a fly on the wall in that household!

Marie - Jaffa and I have loved hosting this interview - we wish you continues success
with your book.

Marie has very kindly agreed to offer a paperback copy

The First Blast of the Trumpet

to one lucky winner of this International Giveaway

More about Marie can be found here

My review can be seen here.