Grab your strawberries and cream and get ready to return to the beautiful Swallowtail Bay!

Summer is in full swing and the locals are getting excited for the launch of the Swallowtail Bay strawberry food festival. But will all run smoothly when festival organiser Hetty’s heart is torn between lord of the manor John Thornhill and successful bakery owner Ben?

Over this latest heat wave, I curled myself into my favourite reading chair, and with a deliciously cold drink at my side I became quite lost in the magic of Swallowtail Bay. It doesn't matter if you haven't read the previous story in this series as both books can be read as standalones stories and Summer Strawberries is a wonderful continuation about the townsfolk of Swallowtail Bay.

From the start I absolutely loved Hetty, she's an entirely capable woman who organises everything superbly well. She's also one of those gifted events organisers who you would really like to have on speed dial, as she can magic up a party at the drop of a hat. And yet, good though she is at her job, Hetty now needs something more challenging than creating superhero themed wrestling parties, and that's when she decides to resurrect the annual Strawberry Festival at Swallowtail Bay which has been lingering in the doldrums for far too many years. However, for it to go ahead properly, she really needs to enlist the help of John Thornhill, a local landowner, whose belligerent family also own the local stately home.

What then follows is a delightful rom-com which has all the right ingredients for a scrumptious summer read. The author brings such warmth and wit to her characters that you really want to spend time with them. I especially enjoyed reading of Hetty's preparations as she goes about organising such a huge summer event, which she does, of course, with great good humour. Her relationship with John Thornhill is beautifully explored and their shared differences only heightens their burgeoning relationship. Whilst there is a bit of will they, won't they romance, it's not all hearts, flowers and roses round the door, as both Hetty and John have other significant worries going on in the background, I thought that John's concerns about his family were particularly well handled.

Summer Strawberries at Swallowtail Bay is a beautifully written rom-com about the joy of living in a small community where loyalty, love and friendship are so very important. I devoured the story in one sitting, stopping just for brief moments to top up my refreshments....and maybe a bowl of summer strawberries was also consumed as I spent a happy afternoon in Swallowtail Bay. 😉 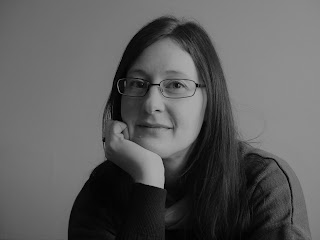 Katie Ginger lives in the South East of England, by the sea, and she really wouldn't want to be anywhere else. Summer Strawberries at Swallowtail Bay is her fifth novel. The first, Spring Tides at Swallowtail Bay is available now. Her debut novel The Little Theatre on the Seafront was shortlisted for the Katie Fforde Debut Novel of the Year award, and her stand-alone Christmas novel Snowflakes at Mistletoe Cottage was a US Amazon bestseller.When she's not writing, Katie spends her time drinking gin, or with her husband, trying to keep alive their two children, Ellie and Sam. And there's also their adorable King Charles Spaniel, Wotsit (yes,he is named after the crisps!)