☼ Delighted to host a Blog Tour stop for this summery read ☼

He doesn't believe in happy endings.
She's lost her faith that they exist.
But could they find one together?

January is a hopeless romantic who likes narrating her life as if she's the heroine in a blockbuster movie.
Augustus is a serious literary type who thinks true love is a fairy-tale.
January and Augustus are not going to get on.

But they actually have more in common than you'd think:

They're both broke.
They've got crippling writer's block.
They need to write bestsellers before the end of the summer.

The result? A bet to see who can get their book published first.
The catch? They have to swap genres.
The risk? In telling each other's stories, their worlds might be changed entirely.

Love, life, friendship, and all the little complicated bits and pieces in between, have thrown January Andrews and Augustus Everett together in unusual circumstances. January is finding that her life has just got rather more complicated after a discovery which rocks her world sideways, whilst Augustus is escaping his own particular set of problems. However, what they have in common is that they are both successful writers with an end of summer deadline looming and not a hint of story in sight. In the hope of gaining some sort of inspiration they decide to swap genres, with Augustus tackling the happy ever afters he doesn't believe in, and January searching for a darker story which doesn't have hearts and flowers around the door.

What then follows is a lovely, summery romantic novel, which, although quite light and fluffy in places, also has its share of heartbreak, and the story covers some difficult topics in a thoughtful, but not too heavy way. I warmed to both January, and Gus and right from the start I enjoyed their spats and grumbles, and I liked the interesting way that their respective stories are threaded throughout giving an interesting insight into their very different personalities. The author brings the small town community of North Bear Shores in Michigan alive, it seems such a great place to live, and Pete's book store, which features so prominently, is definitely my kind of book hideaway. 😊

With some lovely moments of light and shade, Beach Read is a lovely summer read and perfect for a lazy afternoon in the garden.

Emily Henry studied creative writing at Hope College and the New York Center for Art & Media Studies, and now spends most of her time in Cincinnati, Ohio, and the part of Kentucky just beneath it. Beach Read is her debut adult novel. 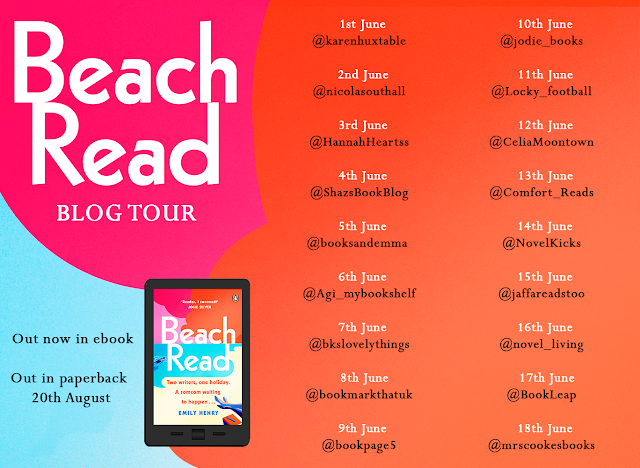