Jaffareadstoo is delighted to be part of this Blog Tour

Bobby Drury left Liverpool after O-levels, knowing he had f***ed them up. Free now, he hitched to Snowdonia. His mum came crying on the phone, ‘You’ve failed them all.’ Bobby knew that. ‘No, Mum, I’ve led Vector.’ This was Thatcher’s lost generation. The slate quarries were walking distance; they’d have a smoke, a party in an abandoned hut, try and climb something. A small culture emerged of punks, nutters, artists and petty thieves, crawling up abandoned rock, then heading to the disco at the Dolbadarn. These were the Slateheads

The people in these interleaving worlds – the punk dole dropout star- climbers; the Victorian quarrymen pioneers; the Welsh-speaking grandson of a ropeman, abseiling in to bolt sport climbs like Orangutang Overhang in the Noughties, Lee and his mates slogging west today – all are polished like nuggets in this 360° view over patience, pride, respect, thrill, movement, the competing claims of home and agency, and above all, a belief in second chances.

‘Good and clear and honest. Like the climbers it presents, the story is careful and risk-taking, ambitious and humble. These are the things of great writing.’ Cynan Jones

‘Peter Goulding gives a personal account of falling in love with the north Wales slate quarries, immersing himself in the climbs and the history... As well as the climbing scene, Peter has done a great job of looking into the life and hazards of the quarrymen themselves, their past times and some of the histories of the conflicts between the communities and the clueless aristocratic quarry owners who cared little for the health of employees... An intriguing read.’ James (Caff) McHaffie

'Incredibly gripping and emotional... a cast of wonderful characters... thrilling and nerve-wracking... I longed for these heroes to achieve their aims... Feels like a group rock and roll biography.' Cathryn Summerhayes, Curtis Brown

It gives me great pleasure to feature a guest post

We are walking along the level that leads to the mouth of the skull, the access tunnel into Twll Mawr (the Big Hole). Under our feet are crunchy tufts of heather, and coarse grass, growing amongst the slate waste. There are also railway tracks, narrow gauge, rusted into blood-brown.

There’s one little section where the tracks are very close to the edge of the cliff. Probably the rock face underneath has sloughed off at some time since the quarries closed. The tracks are still there though, and I walk across them, trusting the slate sleepers.

There is an explosion of feathers under my feet. A small black bird zips off into the sky, it has waited until the very last second before bursting off. “Shit myself,” I mutter. The bird flies, it looks like a blackbird, but I just see a white band around its breast as it jinks. “Oh. Ring Ouzel.”

“Cool,” says Becky who is just behind me. She stands and watches it fly around.

“Come on though,” I say. “Its nest is probably here, let’s fuck off before it leaves its eggs for good.” We keep going. Lee is following a little way behind.

There are patches of rock-fall from the unstable cliffs. One section is a mixture of rubble and ogre-scale dice. Little white, black and orange spiders have slung webs and support lines across the gaps between blocks. I don't like to walk carelessly through them, it feels really unlucky to cut an arachnid climber’s rope. It’s as easy to hop from top of block to top of block. More fun too.

Further along the hillside are the Peregrine Levels. There used to be a climbing ban, so as not to disturb them nesting, but that got dropped because the ‘Grine nest all over the multi-level cliffs. They hunt medium-sized birds, like ducks, but here it is more likely to be pigeons - rock doves, the same kind you see at every railway station and town centre. The ‘Grine dive on them at two hundred miles an hour, boff, and an explosion of feathers.

Pigeons and peregrines have the potential to thrive in cities. Our big artificial cliffs of concrete and glass feel like real cliffs to them. Sometimes they get real stone, on Norwich Cathedral you can watch the Peregrine Falcons raise their chicks by remote camera.

In through the cool dark of the tunnel, barely a hundred yards long, and into Twll Mawr that the quarrymen called Matilda. Out of the tunnel we walk around past a wrecked quarryman’s hut with the roof beams falling in. Moss and ferns are taking over.

While Lee and Becky set up their ropes, I venture onto the scree. Down at the bottom is a cluster of white bones and matted hair. The skull is gone, likely nicked as a souvenir by another climber. I reckon it isn’t a sheep, more likely a wild goat. It would have lost its footing about a hundred metres up on the scree slopes above the sheer cliffs, and not been able to outrun the avalanche. A brief parabola of freedom off the edge. It would have been good food for the ravens, another cliff-and-height-loving bird, clever enough to eat absolutely anything. One flies overhead just now, hard crawck calls like creaks of rock-on-rock.

Later in the week, Lee and I are walking up from the old ruined barracks for the workers from Ynys Mon, a.k.a. Anglesey. Up the slopey road, in a dry brick-edged channel to take overflow water, there are a small gang of wild goats.

One of the younger goats is making a challenge to be the boss of the pack. He is in the bed of the overflow, makes small butting charges, crashing his thick forehead into the boss-goats skull. Both of them have enormous horns, easily a curving foot long, and when they butt, their horns tangle and they need to shake their necks to be able to retreat.

We make appreciative boxing-match-spectator sounds at particularly butts. “Oof. That was good.”

The younger goat has got the aggression but experience is telling. The boss-goat has the advantage of height, his downward butts are harder. The younger goat starts to give way, and then a few of the pack inferiors start to join in with the boss, currying favour by backing him up, late now that the battle is nearly over. Watching with mild interest are the female goats. The whole thing looks like a Saturday night fight outside a pub, for mating rights.

Peter Goulding is a climber and writer from the north of England. He was born in Liverpool in 1978, lived in County Durham for years, and currently lives with his partner and son in rural Norfolk. He works at Center Parcs as an instructor, and goes climbing to north Wales and the Peak District as often as he can. In 2019, he won the New Welsh Writing Awards: Rheidol Prize for Writing with a Welsh Theme or Setting. 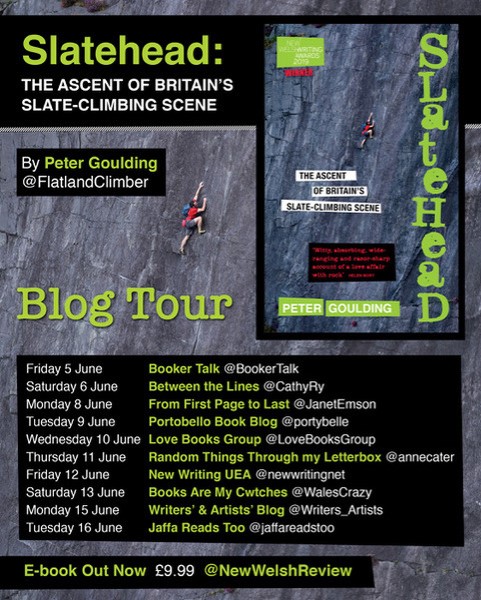