Delighted to be part of this exciting Blog Tour
A vicious killer and a traitor on the team – can DI Harris see the truth before it’s too late?
On the first day of her new job, rookie cop DI Eva Harris is called to a chilling crime scene – a body drained of blood, with the eyes removed. It’s only the first of several similar murders, reminiscent of a series of bloody killings several years ago. Is the same killer back, or is a new threat menacing the area? As the bodies mount up, Harris must uncover the truth. But, the threat doesn’t only come from outside. Within her own team, there is a traitor at work…
What did I think about it..
DI Eva Harris's first introduction to her new investigation team is not without its share of trauma as the discovery of a mutilated body seems to point towards a serial killer who was never found, and yet, despite the similarities to the past case, there is something about this new chilling, modus operandi, which causes Eva Harris to question what has gone before.
What then follows is a menacing crime thriller which has more than enough intrigue, spills and thrills, to keep you guessing from the start, and as the tension starts to rack up to high there is always something new and exciting to discover. The story has several sub plots, some related to the investigation, whilst others take an altogether different turn and look into the possibility of police corruption at a high level. It's obvious from the start that there is rather more to DI Harris than first appears, she's an enigmatic character, and comes with some interesting issues in her past which threaten her current situation in more ways than one.
I enjoyed listening to the story and the 13 hours and 4 minutes of the audio book passed by very quickly. Overall the narration is good and Louise Brealey's voice reminded me of how I imagine DI Harris would speak which gave an altogether more intimate feel to the story as if Eva was speaking directly to me.
20/20 is a fast paced crime thriller which kept my attention from beginning to end.
About the Author
Carl Goodman is a designer and media consultant who has worked with everything from hot-metal type to computer animation and virtual reality. His interactive projects have twice won BAFTA awards. He has worked with companies and universities across Europe and the US on government-funded R&D programmes, and with major international brands on new product development, but he absolutely draws the line at commuting. He loves writing, both crime and science fiction, and enjoys stories that have both a technological edge and a dark, visceral theme. He enjoys research, although sometimes the material he unearths worries the living daylights out of him. Carl lives in Surrey with his wife and has an adult son.
About the Narrator
Louise Brealey is an English stage and screen actress and writer. She is best known for playing Molly Hooper in the BBC's Sherlock. Her other television work includes Clique (BBC/Amazon), A Discovery of Witches (SKY), David Mitchell and Robert Webb’s sitcom Back (Big Talk/Channel Four) and Gomorrah (SKY Atlantic).
Twitter @Carl201010 #TWENTYTWENTY
@AudibleUK     @midaspr
Audible UK 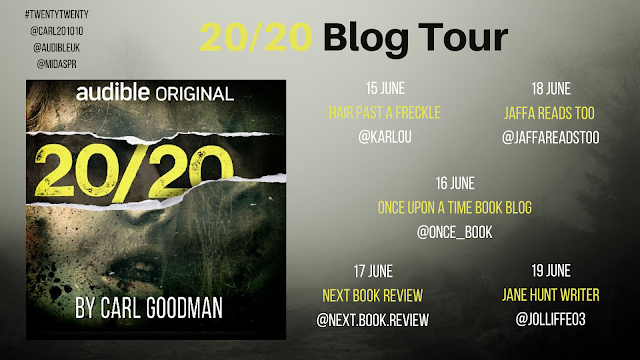