☼ Delighted to host a stop on this summery blog tour ☼

Summer in Cornwall is the perfect time for a fresh start…

Seven years ago, Marina Hudson’s husband was lost at sea. She vowed to love him for the rest of her life – but when kind-hearted Lachlan arrives in Porthmellow, should she deny herself another chance at happiness?

Tiff Trescott was living life to the full as a journalist in London – until her boyfriend’s betrayal brought it all crashing down. Fleeing to her cousin Marina’s cottage, Tiff feels like a fish-out-of-water. And when brooding local Dirk wins a day with her in a charity auction, she’s thrown headfirst into Cornish life.

This summer promises new beginnings for both Tiff and Marina. But are they too good to be true?

Tiff Trescott's first encounter with the devilishly handsome, Dirk doesn't get off to the best of starts and when she discovers that he lives just a couple of cottages away from where she is staying with her best friend, Marina, well, it's only a matter of time before their paths cross again. Journalist, Tiff is trying to restart her life after a disastrous career mistake in London, and being back in Cornwall with her friend is hopefully going to allow her a new start. Meanwhile, Marina is nursing her own sense of loss, and when she meets the enigmatic, Lachlan, it may just be possible that she can start to put her traumatic past behind her.

This lovely story takes us right back to the gorgeous Cornish town of Porthmellow which we have visited before in previous stories. It's so nice to be back amongst the townsfolk who make this little corner of literary Cornwall their home. I especially enjoyed getting to know this new set of characters who leap onto the page as familiar as friends we have known for a while. The sizzling sexual chemistry between Tiff and Dirk is nicely done, and the quiet impact of Marina's burgeoning relationship with Lachlan adds a gentler, but no less passionate, tone to the story. However, it's not all about romance as the story covers a rather sensitive story which involves something which has happened in Marina's past, and which affects the way she views her relationship with Lachlan.

Beautifully written and a lovely summer read - A Perfect Cornish Escape was just the escape I needed  during this difficult time of lock down. 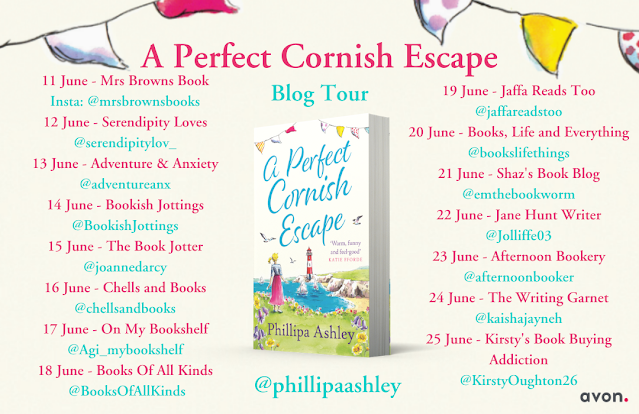