Book Excerpt ~ The Alchemist of Lost Souls by Mary Lawrence

Jaffareadstoo is delighted to bring you this tantalising excerpt

from  The Alchemist of Lost Souls

In book 4, The Alchemist of Lost Souls, disgraced alchemist, Albern Goddard, has concocted a new element, “an amalgam of earth and fire.” Once he understands the nature of this lapis mortem, he hopes to win back the favor of King Henry VIII. Unfortunately, the element is stolen. Albern seeks his estranged daughter, Bianca—now pregnant with her first child—for help in finding it.

When a woman’s body is found behind the Dim Dragon Inn, an eerie green glow issuing from her mouth, rumors circulate about how she died. Bianca traces the element to a dead-end believing it is lost and no longer a threat. But when John, her husband, is conscripted and the element turns up again, Bianca risks her life and that of her unborn child’s to prevent it from being used against the king’s army.

This tale begins with a rascally lad and a disgraced alchemist. One sought allowance with a group of puckish boys, and the other wished forgiveness from his petulant king. The two crossed paths one spring day when the air puffed warm against their cheeks, calling to mind the hope of renewal that comes with the lengthening days and appearance of green tips on trees.

Albern Goddard wore his best woolen gown, one he’d bought from a fripperer back when he was in the king’s good graces. The clothes dealer had gotten it from the widow of a barrister who had been stabbed in the back--a fitting end to any lawyer, thought Albern. The rip had been mended and the blood stain scrubbed clean. No one was the wiser, and he himself barely remembered the gown’s tainted history as he strode triumphantly down Thames Lane.

His coif did not hide the lift of his chin; the scholarly garb accentuated his proud posture--for here was a man basking in the ticklish glow of divine favor. A smile strained the muscles around his mouth; his usual expression was one of stoic indifference. And that was on a good day.

He may not have discovered the philosopher’s stone--the coveted agent of transmutation capable of turning base metal into gold; instead, he had discovered a substance of unplumbed worth. Of this he was certain. Months of collecting and fermenting the golden stream--his golden stream in urns stinking up his alchemy room--had eventually wrought a substance so astonishing, so exceptional, that he could hardly keep from whooping and dancing down the street.

However, unbridled enthusiasm can easily turn a man into a fool. The alchemist knew this; he had eaten from fate’s fickle hand before. So, he quashed the smile on his face, replacing a cheerful expression with one more solemn. Ahead of him lay several days of careful analysis to prove his discovery’s importance.

Meanwhile, on the street ahead, there lay an ambush in the form of a gaggle of gamins. Their winter boredom had festered, so that this day of sun and warmth was like a needle to their boil, releasing the hellions to run free.

What boy can resist the call of his friends’ mischief? After a winter of trudging through cold wet lanes lugging home bundles of sticks for his mother’s fire, of being cooped up with his siblings like chickens kept from wolves, of listening to the constant wails of younger ken, what lad of any spirit could suffer another moment staring at four cracked and soot-grimed walls? So it was that on this day, a boy with thread-bare britches and raggedly hair wandered farther than was his usual habit.

He hitched himself to a group of boys kicking a pig’s bladder stuffed with hay. Other stragglers left their chores to join in, and soon there was a mob of exuberant, yelling imps tripping over one another and upsetting geese, pushcarts, and pedestrians. They raced around, calling each other “lead-legged”, and “beetle-brained buzzards”. They ran down Bread Lane and exited onto Thames Street just as Albern Goddard was crossing it. The ball rolled to a stop inches from the alchemist’s shoe. 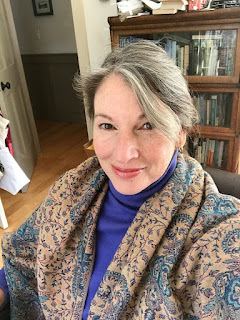 Mary Lawrence lives in Maine. Her debut mystery, The Alchemist’s Daughter (Kensington, 2015) was named by Suspense Magazine as a “Best Book of 2015” in the historical mystery category. Her articles have appeared in several publications, including The Daily Beast. Other books in the series include Death of an Alchemist, and Death at St. Vedast.