A hidden masterpiece.A secret buried for 500 years.And one woman determined to uncover the truth.When London tour guide Helen Oddfellow meets a historian on the trail of a lost manuscript, she’s intrigued by the mystery – and the man. But the pair are not the only ones desperate to find the missing final play by sixteenth century English playwright Christopher Marlowe. What starts as a literary puzzle quickly becomes a quest with deadly consequences.When Helen realises the play hides an explosive religious secret, she begins to understand how much is at stake. Relying on her quick wits, she battles far-right thugs, eccentric aristocrats and an ancient religious foundation, each with their own motives for getting their hands on the manuscript. She discovers there is a price to pay for secret knowledge, but how high is too high?
Unlawful Things was shortlisted for the Virago/The Pool New Crime Writer Award.

If you love a bit of historical sleuthing and a healthy dose of fast-paced action, you'll enjoy this intriguing debut thriller from Anna Sayburn Lane. 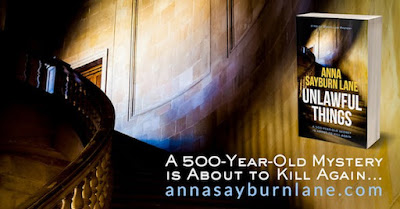 Helen Oddfellow has a fascination with the playwright, Christopher Marlowe, and her work as a London tour guide brings her into contact with a historian who suggests to her that there may well be a lost Marlowe manuscript. More than a little intrigued by this idea, Helen gets drawn into a very dangerous world which will have repercussions, not just for herself but also for those characters she comes into contact with.

I was gripped by the opening prologue, which I thought was a very clever introduction, and I quickly became involved in trying to keep one step of ahead of the action, keeping a close eye on what was evolving as the story progressed. Even if you don't know anything about Marlowe and the controversy around his death in 1593, there are more than enough modern day twists and turns to keep the action feeling relevant and exciting. The author writes well, both from a historical perspective, which I found to be highly informative about Marlowe's life and times, she's clearly done her research very well, and also about the uncertainty and danger of the social and political climate we live in today.

This was a really interesting idea for a novel as it combines both literary history and mystery perfectly. Helen's determined quest to discover the truth allows the story to look more closely into the tangled history of Christopher Marlowe, a fascinating subject in himself, but which also combines a really dark historical mystery, with a modern day fast action thriller.

Unlawful Things is a great start to what I hope will be more books, with literary connections, featuring Helen Oddfellow. 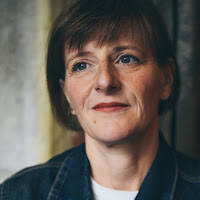 Anna Sayburn Lane is a novelist, short story writer and storyteller, inspired by the history and contemporary life of London. Unlawful Things is her first novel. She has published award-winning short stories in a number of magazines, including Mslexia, Scribble and One Eye Grey. Her Mslexia award-winning story Conservation was described by judge and Booker-longlisted author Alison MacLeod as “a powerful and profound contemporary piece in which one man’s story stands for an entire nation’s… it’s a punch to the heart, a story that will haunt and touch its readers deeply”. She has told stories at London club The Story Party and One Eye Grey’s Halloween event, Moon Over the Lido.