When Detective Jack Dylan heads home to his wife after a residential course, he has no idea that an extraordinary succession of events is about to turn his life upside down.

A vicious, unprovoked personal attack is just the start. The discovery of his wife’s death in a road accident also reveals her affair, and his step-daughter is being expelled from university for drug use. Professionally, two teenagers have gone missing and one is soon found dead.

An ordinary man might break under the strain, but Dylan is no ordinary man. He knows that his survival depends on him carrying-on regardless, burying himself in his work, relieved by the distraction of newcomer to the admin department, Jennifer Jones.

His determination to pursue the criminal elements behind the events – both personal and professional – is to be his salvation, and his relationship with Jen, his ‘Guardian Angel’, will turn out to be the mainstay of his future, both within the Force and at home.

Life may have changed, but nothing will stand in the way of Dylan’s determination to seek justice

this tantalising excerpt from Poetic justice

Frank Bland’s hand trembled as he fumbled for the phone. The receiver felt too heavy as he lifted it. His heart was pounding in his chest; his shoulders heaved with the effort of running; his legs felt like jelly. When he breathed in, the cold air froze his throat and lungs. Leaning heavily against the door, Frank dialled 999 and, while he waited for someone to answer, he closed his eyes and left a prayer on God’s answering machine. An angel in the mortal guise of a BT operator answered.

Shock, it appeared, had rendered him dumb. The controller sought to get him to speak, listening all the while for background noises, ruling out a kid’s prank. Frank licked his lips; his tongue felt like sandpaper.

‘Can you tell me your name? Where are you ringing from?’

When the line remained soundless the operator persisted. ‘Can you cough or make another audible sign to let me know that you are in need of assistance?’

He could see his breath spiral upwards out of his mouth. He tried, and tried again, but he couldn’t make a noise. A rush of adrenalin caused a burning sensation to run through his veins and, as his panic loomed larger, he could feel the perspiration run the length of his spine.

The operator persisted. ‘Dial 55 if you are in danger.’

Fleetingly, Frank looked at his right hand, the skin pale grey in the moonlight that shone through the window of the call box. He was shaking, and not from the cold; sweat stuck his shirt to his back. He extended his quivering fingers and, as quickly as they’d allow, dialled 55.

The call was immediately transferred to the police operator. His voice was deep, calm and soothing, but at the same time authoritative, just what Frank needed at that moment. He felt the blood rush back to his brain and control come sliding in.

‘If you’re in danger please dial a number,’ said the police operator.

Frank forced his voice out through his lips. His throat felt so constricted, he marvelled that he could breathe. His words came out in a rush, as if they’d been suppressed in a bubble.

‘There’s been an accident. The car in front of me, it went off the road and vanished down the ravine.’

His frantic, breathless words, as the only witness on the road at the time heading in the same direction towards Harrowfield Town, were recorded.

When the police operator ended the call, Frank slammed the receiver down and, backing away, pushed the heavy red door open and went out into the darkness. As advised, he returned to the scene.

He followed the reflective road studs that lined the sweeping highway, which weaved and stretched for miles ahead across the Pennines. The sky was clear and the moonlight softened the darkness. The mild, dry conditions were a complete contrast to the previous weekend, when winter had arrived overnight, as it often did in the north of England. It seemed too calm for what he had seen to be real.

Hands in his pockets, and still trembling from shock, he watched the hazard lights on his car flashing rhythmically. With only a little light from the sky, he stood on the grass verge, still struggling to believe what he had seen, and peered down into the blackness of the ravine. All was quiet and still. His heart was beating painfully fast in his chest, after the exertion of the uphill hike. He struggled to catch the tight, hard breaths inside him and forced them out slowly instead, to make himself calm down.

He looked about him. The lights of the M62 were behind him, but neither they nor the reflective road studs were any use in his attempt to follow the numerous sheep tracks that led down into the abyss. If only he were younger and fitter, he’d have been down like a flash. He looked up to see a swirling shape appear, shimmering like the folds of a curtain in the sky, stirred by the wind in an eerie silence. But this was no divine intervention come to help those in the crash; it was smoke rising from the vehicle - a sign, he feared, of worse to come.

Frank looked from left to right, unsure from which way the emergency services would come, straining to hear the sirens approaching, hoping and willing another vehicle to come along to bring him support on the isolated stretch of moorland road. He felt useless, he felt vulnerable, he felt extremely scared.

In the stillness, and with little else he could do, he berated himself for not listening to his daughter, who had begged him, on the death of his wife, to get a mobile phone. ‘What if the telephone box had been vandalised?’ he could hear her say. He shuddered to think what he would have done then.

My thoughts about POETIC JUSTICE..

It’s been a long time since I read a police procedural novel in one sitting but Poetic Justice has been such a great introduction into DI Jack Dylan’s world that I had difficulty leaving it for any longer than it took to make myself a restorative cup of tea, in my #Team Dylan Mug. 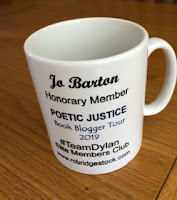 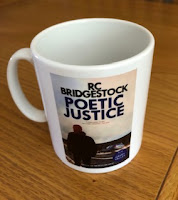 For those who have already read the series, this prequel into how Jack Dylan’s literary life began will be a lovely bonus as I am sure regular readers will already be acquainted with what makes this enigmatic Detective Inspector tick. However, for those readers, like me, who are completely new, this is a grand introduction to a series, which is, with the publication of Poetic Justice, already nine books in. I really can’t wait to get my hands on them all!

The story opens with a dreadful accident, the bleakness of the scene, and the only witness account as he telephones for help is quite chilling, bringing the cold air of a winter night sharply into focus. The results of this accident will have far reaching consequences, not just for the police team leading a complicated investigation, but also for Jack Dylan who is intimately involved with one of the accident victims.

Poetic Justice is not all about Jack Dylan, and even though he does play a major role in events there is a limit to just how much sadness one man can cope with, and Jack Dylan certainly has his share of heartache. So it was refreshing for the investigative team to have other cases to work on, and one involving a local children's home and two missing children adds an interesting complexity to an already complicated story line. As I would expect from two writers who have spent most of their time working within a major police force, the police procedural aspect is particularly well done. What comes across is the banter between colleagues, which is often jokey and irreverent but always clever and precise, showing just how the police service, when under pressure, allow the professional to take over from the personal.

I absolutely loved this story from start to finish and, I think, what struck me most as I read along was just how visual the story was, because even as the words were being processed in my brain, I already had a clear visual image of events, rather like I was watching a TV drama unfold.

Having read Poetic Justice, I have to say that Jack Dylan is now my new hero, and as the writers so cleverly maintain, “If you had to choose to be on anyone’s team, you’d want to be on Team Dylan any day of the week”....I couldn’t agree more! 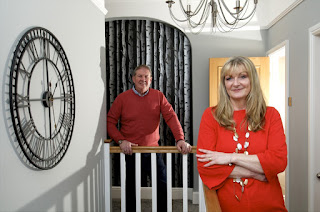 RC Bridgestock is the pen name of writing duo Carol and Bob Bridgestock. Between them they have nearly 50 years of high level experience in West Yorkshire Police. The couple are story-line consultants on Happy Valley and Scott and Bailey and appear regularly on TV, radio and in the press.