Educated, beautiful and the daughter of a prosperous merchant, Angelica Lilly has been invited to spend the summer in high society. Her father’s wealth is opening doors, and attracting marriage proposals, but Angelica still feels like an imposter among the aristocrats of Cornwall.

When her brother returns home, ill and under the influence of a dangerous man, Angelica’s loyalties are tested to the limit. Her one hope lies with coachman Henry Trevelyan, a softly spoken, educated man with kind eyes. But when Henry seemingly betrays Angelica, she has no one to turn to. Who is Henry, and what does he want? And can Angelica save her brother from a terrible plot that threatens to ruin her entire family?

Angelica Lilly is a beautiful and compassionate young woman whose entry into Cornish society would be guaranteed by an advantageous marriage because even though her father is a prosperous merchant, Angelica's deceased mother's background as an actress can sometimes be a hindrance. When Angelica's younger brother arrives home in poor health and with a friend in tow who is less than supportive, Angelica gets drawn into a very dangerous world which tests both her loyalty and her resilience to the absolute limit.

The Cornish Lady takes us back to an eighteenth century world of social prejudices and to a time when the country was largely unsettled when, due to the high price of food, poorer people were going hungry. To a large extent, Angelica, is sheltered from the worst of life but when the story moves to Falmouth and Truro, Angelica soon finds herself involved in some very dangerous events. Angelica is a feisty heroine, who is filled with a real sense of purpose and right from the start I felt really comfortable in her company and loved seeing how she grew in confidence as her story progressed.

There's a wonderful authenticity to this Cornish saga as each story explores a different aspect of eighteenth century life. What I love the most is the way that the author brings her characters to life so beautifully and allows them the time to tell their story whilst keeping the historical accuracy so firmly in place. Familiar characters are allowed to pop up from time to time, so that we can catch up with what's been happening to them, but without them ever dominating the way the new story is evolving.

There is no doubt that this author has made the world of eighteenth century Cornwall completely her own. Each successive story goes from strength to strength and there is so much scope for this series to continue that I really can't wait to see where this talented writer takes us to next. 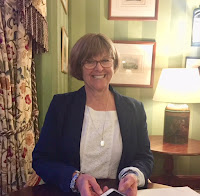 Nicola Pryce came to writing after a career in nursing. She has an Open University degree in Humanities and is a qualified adult literacy support volunteer. She is lives in the Blackdown Hills in Somerset and when she isn’t writing she’s probably gardening or scrubbing the decks. She and her husband love sailing and for the last twenty years they have sailed in and out of the romantic harbours of the south coast of Cornwall in search of adventure: it is there where she sets her books. The Cornish Lady is her fourth book: The others are Pengelly's Daughter, The Captain's Girl, and The Cornish Dressmaker. Nicola is a member of the Romantic Novelists' Association and The Historical Writers Association.

Win a signed copy of The Cornish Lady, a box of Cornish Fudge and some bookmarks 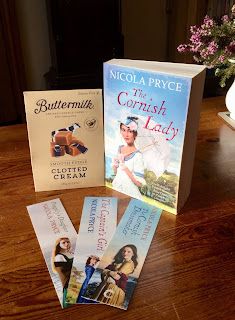 *Terms and Conditions –Worldwide entries welcome. Please enter using the Rafflecopter box below. The winner will be selected at random via Rafflecopter from all valid entries and will be notified by Twitter and/or email. If no response is received within 7 days then Rachel’s Random Resources reserves the right to select an alternative winner. Open to all entrants aged 18 or over. Any personal data given as part of the competition entry is used for this purpose only and will not be shared with third parties, with the exception of the winners’ information. This will passed to the giveaway organiser and used only for fulfilment of the prize, after which time Rachel’s Random Resources will delete the data. I am not responsible for despatch or delivery of the prize.