Blog Tour ~ A Death in Chelsea by Lynn Brittney

Set against the backdrop of WW1, Mayfair 100 is the telephone number for a small, specially-formed crime fighting team based in a house in Mayfair.

A call comes through to Mayfair 100, where the intrepid team of investigators eagerly await their next case.

A society gossip queen has been found hanged in her room in mysterious circumstances. Her enemies are numerous – and her family are convinced she was murdered. Can the group uncover the truth in a case that twists and turns to delight and terrify its readers.


Cleverly combining social history, and particularly the effects on the country during WW1, A Death in Chelsea is a continuation of the cosy crime series which began with A Murder in Belgravia. This story continues the association between the colourful characters who make up the investigative team known, quite simply as Mayfair 100. Before the story begins there's a great introduction to the Mayfair 100 series, and particularly to the characters,  which is really helpful if you haven't read the first book.

The story opens with a woman's death in the affluent area of Chelsea, first reports suggest that this society gossip has taken her own life, but as the investigation gets underway, it becomes obvious that this is not a clear cut conclusion. What then follows is an intricate, and lively, investigation which takes the team into some dark places and uncovers secrets, and lies, which have a real bearing on the outcome of the story.

Mayfair 100 is a really interesting idea for a crime series as there's such an authentic historical feel to the story which reflects what was happening in the country during 1915. It was a time of great social change with the old values of the aristocracy being challenged as more and more of the working classes were either joining the army or, in the case, of women leaving domestic service to work in the more lucrative industries which were actively recruiting women.

I enjoyed the hidden complexities of A Death in Belgravia, and the many twists and turns in the plot were handled well and kept me guessing. I enjoyed watching how the team played to their individual strengths, using their unique skill mix to great effect as they each try to unravel the complicated clues which surround this mysterious death in Chelsea.

This is the second book in the Mayfair 100 Mystery series and I'm sure we're going to see a lot more of this investigative team in future crime stories.

Lynn Brittney has been a writer for almost 30 years. Murder in Belgravia is her first crime novel. Her second novel was included in the UK Government’s Recommended Reading List for Boys and described by the Daily Telegraph: “furious swordplay, tremendous chases, atmospheric journeys and wince-inducing reminders that this was an age before anaesthetics. 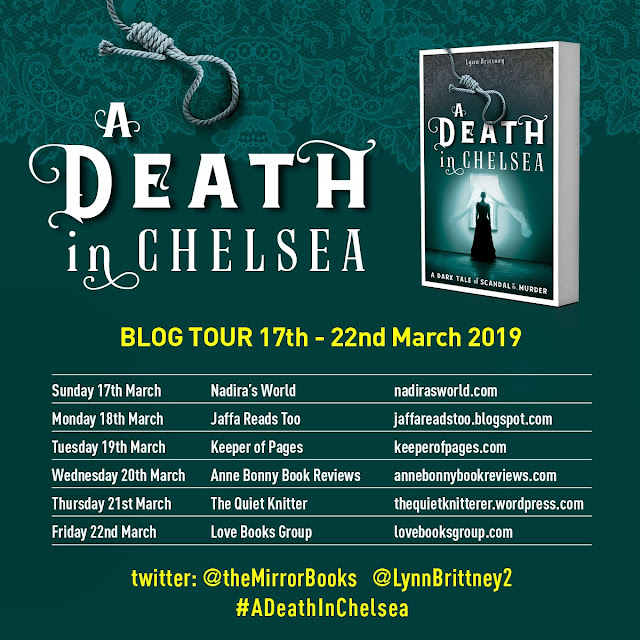