Maddie and Ian’s romance began when he was serving in the British Army and she was a travel writer visiting her best friend Jo in Europe. Now sixteen years later, married with a beautiful son, Charlie, they are living the perfect suburban life in Middle America.

But when an accident leaves Maddie badly scarred, she begins attending therapy, where she gradually reveals her fears about Ian’s PTSD; her concerns for the safety of their young son Charlie; and the couple’s tangled and tumultuous past with Jo.

From the Balkans to England, Iraq to Manhattan, and finally to an ordinary family home in Kansas, the years of love and fear, adventure and suspicion culminate in The Day of the Killing, when a frantic 911 call summons the police to the scene of shocking crime. But what in this beautiful home has gone so terribly bad?

Beautiful Bad is an interesting psychological suspense story which opens with a frantic 911 call and the indication that something really bad has happened. The timeline then flips to ten weeks earlier and our proper introduction to Maddie, who is one of the main narrators. What then follows is an intricately plotted story, with multiple points of view, which looks at both the complexities of friendship and the minutiae of marriage.

As with all psychological suspense stories there are lots of twists and turns so it pays to keep a close eye on what's going on especially as the story jumps around rather a lot. I must admit to being rather lost in the story from time to time and I had to back track occasionally to remind myself of something I had missed. Moving between timescales and locations adds an interesting dimension to the story which can, at times, appear a little bit complicated, but once the complexities of the timeline start to become more apparent, so the story settles and it all becomes much more interesting.

My general impression is that this is one of those stories which takes quite an investment in time as the complicated plot and unstable narrators takes some getting used to, however, if you like complex psychological suspense which takes you to fascinating locations which range from the Balkans to Kansas via Iraq then Beautiful Bad is well worth reading. 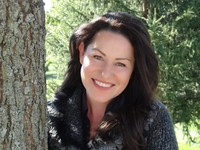 Annie Ward has a BA in English Literature from UCLA and a MFA in screenwriting from the American Film Institute. Her first screenplay, Strange Habit, starring Adam Scott was an official selection of the Sundance Film Festival and the Grand Jury Awrad winner at the Aspen Film Festival. She received a Fullbright Scholarship and An Escape to Create Artists residency. She live in Kansas with her family.