For a decade, Hannah’s life has been pretty close to perfect – she has a great job, she’s married to Mark, and her child-free existence means she’s free as a bird. The only sadness in her life is a fall-out with her sister Diane, who hasn’t spoken to her in over ten years. But now Diane is on her doorstep – and this time, she’s got her teenage daughter Mia in tow.

When Diane asks if Mia can stay with Hannah and Mark for a few days, Hannah is glad of the chance to get to know her niece. But as the days turn into weeks and Diane doesn’t return, Hannah begins to worry. Why hasn’t her sister been in touch?

Diane is carrying a devastating secret that will destroy Hannah’s carefully constructed life. But how much is she willing to reveal – and when will she pick her moment?

When Hannah's sister, Diane, turns up unexpectedly along with her teenage daughter, Mia, Hannah is apprehensive as she and her sister haven't seen each other since Mia was a toddler. So many secrets and lies separate the sisters, but when it comes down to it, Hannah is prepared to help Diane when she needs it, however, what she doesn't expect is that all of their lives are about to change forever.

What then follows is a dramatic family saga, which looks at the relationship between the sisters and which opens up to scrutiny lives which have been damaged by huge secrets and devastating lies. Caught in the middle of this drama is Mia who is struggling with all sorts of conflicting emotions and is increasingly lost and quite bewildered by the way her mother is acting.

The author writes this type of family drama really well and offers an insight into what makes people act in the way they do. The story twists and turns in quite a dramatic way and whilst its quite a dark story ,with some possible triggers which some readers might find upsetting, it's also really fascinating study into the vagaries of family life, and of the sometimes toxic relationship which can happen between siblings.

I found My Sister's Lies to be a powerful story and I was so engrossed in the way that everything was playing out that I read the book in one sitting reluctant to leave it in case I missed something important. 😊

Former journalist S.D. Robertson quit his role as a local newspaper editor to pursue a lifelong ambition of becoming a novelist.

Stuart lives in a village in North West England with his wife and daughter. There’s also his cat, Bernard, who likes to distract him from writing – usually by breaking things. 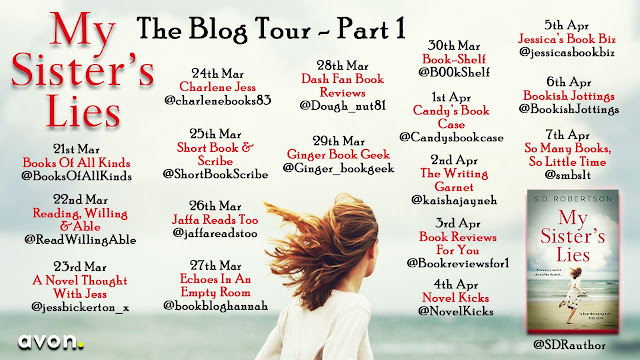