Blog Tour ~ Belle of the Back Streets by Glenda Young

Everyone recognises the cry of Meg Sutcliffe as she plies her trade along the back streets of Ryhope. She learnt the ropes from her dad when he returned from the War. But when tragedy struck, Meg had no choice but to continue alone, with only her trusty dog Spot and beloved horse Stella for company. Now the meagre money she earns is the only thing that stands between her family’s safety and predatory rent collector Hawk Jackson...

Many say it’s no job for a woman - especially a beauty like Meg who’s noticed everywhere she goes. When she catches the eye of charming Clarky it looks like she might have found a protector and a chance of happiness. But is Clarky really what he seems? And could Adam, Meg’s loyal childhood friend, be the one who really deserves her heart?

There's a lovely atmosphere in Belle of the Back Streets which brings to life the North East of England during the early part of the twentieth century. Meg Sutcliffe is a beautiful young woman, who finds that she has to do whatever she can to provide help for her mother and younger brother. Times are hard, poverty is rife and Meg constantly struggles to survive and keep her head above water, especially when there are men around like the dangerous, rent collector, Hawk Jackson and the charismatic, Clarky.

The author writes really well and brings to vivid life this area of the North East which she calls home. Her close connection to the history of the area gives such an authentic feel to the story and the hardships experienced by ordinary people, especially when life is really tough, shows just how resilient folk had to be. And even though they have nothing, there is natural kindness between the friends who rally round when Meg and her family are affected by personal tragedy.

I've really enjoyed reading this historical saga, the story grabbed my attention from the beginning and I loved how the author brought together a likeable set of characters and combined their stories with what was actually happening at the time. The effect of the 1921 Miner's strike and the hardship which greatly affected Northern communities is written about with a real sense of history and community spirit.

Belle of the Back Streets is this author's debut historical saga and from the strength of her writing I am sure we are going to see much more of her excellent stories in the future. 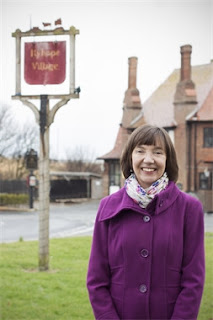 Glenda Young credits her local library in the village of Ryhope, where she grew up, for giving her a love of books. She still lives close by in Sunderland and often gets her ideas for her stories on long bike rides along the coast. A life-long fan of Coronation Street, she runs two fan websites for which she sometimes interviews the cast of the show. 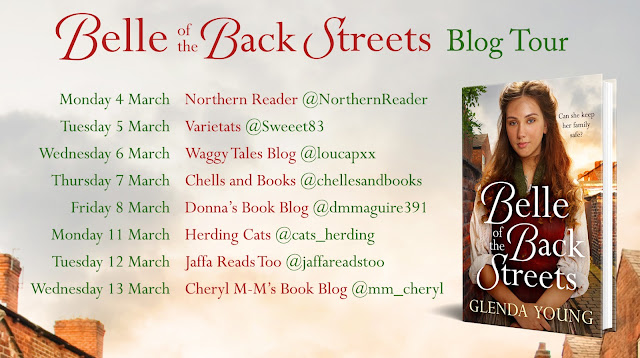