Based on a true story, this gorgeous new novel follows the fortunes of three Berliners caught up in an art scandal—involving newly discovered van Goghs—that rocks Germany amidst the Nazis’ rise to power.

Hedonistic and politically turbulent, Berlin in the 1920s is a city of seedy night clubs and sumptuous art galleries. It is home to millionaires and mobs storming bakeries for rationed bread. These disparate Berlins collide when Emmeline, a young art student; Julius, an art expert; and a mysterious dealer named Rachmann all find themselves caught up in the astonishing discovery of thirty-two previously unknown paintings by Vincent van Gogh.

In the Full Light of the Sun explores the trio’s complex relationships and motivations, their hopes, their vanities, and their self-delusions—for the paintings are fakes and they are in their own ways complicit. Theirs is a cautionary tale about of the aspirations of the new Germany and a generation determined to put the humiliations of the past behind them.

In the Full Light of the Sun is trio of interconnected stories which have as their focus the mysteries of the art world, and in particular, the artist, Van Gogh. The story is set in Berlin in the early 1920s during the economic decline, when the downturn in the standard of living had such a catastrophic effect on daily life. We then move forward chronologically into the later years of the 1920s, finally culminating in 1933, when the whole of the story comes to its conclusion.

Our narrators for most of the story are Julius Köhler-Schultz, a rich art collector living in Berlin and recently separated, rather acrimoniously, from his wife. Köhler-Schultz comes into contact with the mysterious, Matthias Rachmann, a young and ambitious art dealer whose interest in finding works of art, which have laid undiscovered, connects these two men and takes the story in a fascinating direction. Emmeline Eberhardt is just seventeen and a talented artist when she first comes into contact with  Köhler-Schultz and Rachmann, an association which will have lasting repercussions for all of three of them.

The Full Light of the Sun is a fascinating look into the largely shadowy world of art dealing, and set, as it is, against the backdrop of a country which was experiencing great social and political upheaval, makes the story all the more complex. The author writes well and has clearly used a large amount of research in order to bring the story alive, and does so with an interesting observational style. The hedonistic atmosphere of Berlin, caught as it was, between two world wars, is well described, as is the complex world of artworks and their, often complicated, provenance.

Beautifully descriptive of a long forgotten world, and inspired by true events, In the Full Light of the Sun, is a considered imagining of a world which stood on the brink of turmoil. What happens in the story reflects the complicated and rather shadowy world of art dealing, and set, as it is, against the backdrop of a country experiencing great social and political upheaval, makes this such an interesting piece of historical fiction.

Clare Clark is the author of five acclaimed historical novels, The Great Stink - now in pre production for a feature film,- is one of two novels longlisted for the Women's Prize for Fiction. She reviews regularly for the Guardian, New York Times and Washington Post and is on the Advisory Board of the Cheltenham Literary Festival. She lives in London. 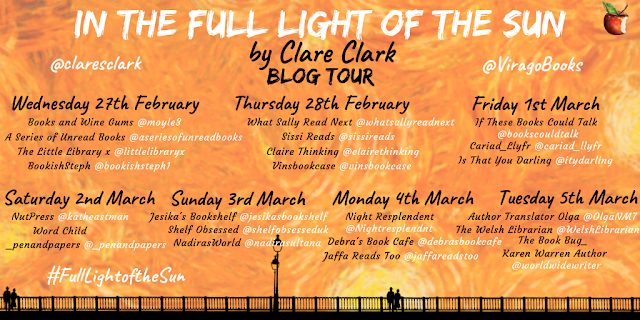