As part of my ongoing tribute during this centenary of WW1, I am delighted to feature the work of some excellent authors who have written novels set during The Great War. 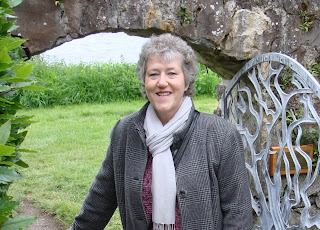 Linda - welcome back to Jaffareadstoo

In a hostile parliamentary encounter with Siegfried Sassoon, war hero, poet and - by 1917 - anti-war campaigner, Winston Churchill claimed, “War is the normal occupation of man. War and gardening”.

I cited that quotation at the beginning of my latest novel, THE TRYSTING TREE. Its two heroes live in different centuries. Both are gardeners with military connections. William Hatherwick enlists in 1914 and Connor Grenville, from a military family, is a staunch pacifist in 2014. William works as a gardener at Beechgrave House in Somerset. Connor runs his own landscape gardening business and is restoring an old walled garden on the Beechgrave estate.

The genesis of THE TRYSTING TREE was a question that had occurred to me when I was researching the fate of old country houses for another novel, UNTYING THE KNOT. What happened to their gardens when the staff went off to fight in World War One? 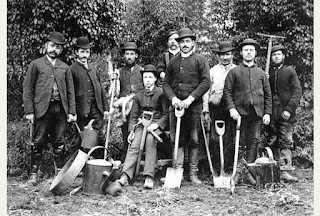 I discovered croquet lawns and flower beds were dug up and turned over to vegetable production. Gardens were managed with increasing difficulty by a skeleton staff consisting of those who were too old or too young to enlist. Elsewhere, women took on work men had to abandon, but this was rarely the case with gardens. When women were employed, they were only allowed to perform the most menial of tasks, such as weeding the gravel drive.

It soon became apparent the war was not going to be “over by Christmas” and that many men would return unfit for work or might not return at all. Since female domestic staff were leaving to take on better paid, easier and more sociable work in factories, owners of country estates had to accept they were facing the end of an era.

It was this dying world that interested me, plus the strange juxtaposition of war and gardening. The loss of life occasioned by WWI is well documented, as is the subsequent social upheaval that led to “the servant problem”, but the decline of the great Victorian and Edwardian gardens is less well-known, with the exception of the “lost” gardens of Heligan in Cornwall which have been lovingly restored.

When I began researching THE TRYSTING TREE I knew the war had destroyed much of the French countryside, including entire villages and I was aware of the slow death of so many beautiful gardens in Britain, but I didn’t know about trench gardens. Churchill was apparently right: even in war zones, then and now, people will try to grow food and flowers. One of the books I used for research was DEFIANT GARDENS: Making Gardens in Wartime by Kenneth I. Helphand. He described these gardens as “an attempt to create a kind of peace in the midst of madness and order in the prevailing chaos." 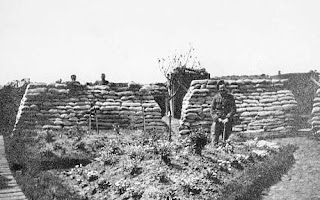 William Hatherwick goes off to fight in France where he creates a garden at the Front using seeds sent by Hester Mordaunt, the daughter of the family who owns Beechgrave. With her brothers and many of the garden staff away fighting in France, Hester longs to be allowed to work in the garden and contribute to the war effort. Here’s an excerpt from the diary she keeps, which forms a large part of the novel…

Some good news at last. When I saw Violet today, she invited me in to her little parlour to listen to the latest news from William. He has started to create a garden! He and some of the other men found some tulips and wallflowers in the ruined gardens of a French village that had been destroyed by shells. They dug them up and transplanted them to make a little garden behind a wall of sandbags. William had sent a charming little sketch. I had no idea he was such an accomplished artist, but Violet said he has filled many sketchbooks over the years.

William has asked Violet to send him some seeds. I begged her to give me the list as I should like to buy the seeds myself and send them. She did so willingly.

I shall venture into Bristol to find a seed merchant where I shall buy William all the seeds he needs, then I shall make up a parcel and enclose a little letter.

I could weep with happiness to think that somewhere, someone is trying to grow something; that in the midst of unimaginable slaughter and destruction, something new will live!

Ultimately Hester’s seed packets hold the key to unlocking a century of secrets. When a storm fells an ancient beech tree revealing a century-old love hidden in its hollow heart, Connor begins to sift through the family archive his grandmother tried to destroy before her death. Who was she trying to protect? And why?...

A century of secrets...
Four women live in the shadow of the Trysting Tree.
All have something to hide.

A man without a memory walks away from the Somme battlefield, while a young woman grieves beneath the tree that will guard her secret for a hundred years.

Ann de Freitas doesn’t remember what she witnessed when she was five. The truth lies buried in the beech wood, forgotten for forty years. Can love unlock Ann’s heart and mind?

Connor Grenville is restoring the walled garden where his grandmother, Ivy used to play. Before her death, she tried to destroy the family archive. Who was Ivy trying to protect? And why?

When a storm fells the Trysting Tree, revealing a century-old love hidden in its hollow heart, Ann and Connor begin to sift through the past in search of answers. What they discover changes everything.

My thanks to Linda for this fascinating guest post.

It's been a real pleasure to have you as our guest today.