Jaffareadstoo is thrilled to be part of the 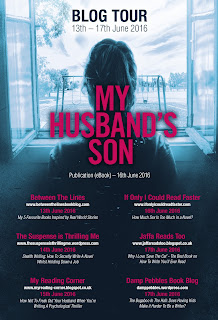 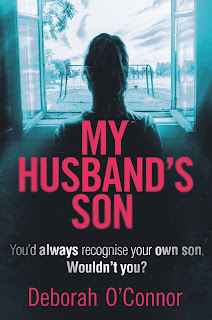 Heidi and Jason aren’t like other couples.
Six years ago, Heidi’s daughter was murdered. A year later, Jason’s son – Barney – disappeared.
Their shared loss brought them together.
The police investigation into Barney’s kidnap remains open, but after five years… it has lost momentum. Then, by chance… Heidi meets a boy she’s certain is Barney. But Jason is equally convinced it’s not him.
It’s Heidi mad? Or is Jason hiding something? And can their fragile marriage survive Heidi’s newfound quest for the truth…?

Hi Deborah, welcome to Jaffareadstoo and thanks for inviting us to be part of your blog tour and for spending time with us today. 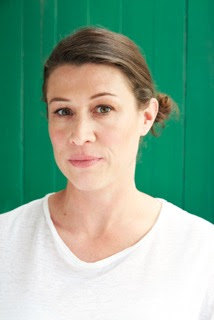 WHY I LOVE SAVE THE CAT: THE BEST BOOK ON HOW TO WRITE A NOVEL YOU’LL EVER READ…

So I am about to recommend a book that is going to change your life (well, your writing life).  Before I share this kick-ass top secret novel-writing weapon with you, a few disclaimers.  First off, when I tell you what this book is called you’re going to think I’ve properly lost it, that I’m three advance review copies to the wind.  Second, when you see what’s on the front cover of said book you’re going to want to shake your head and shout ‘Really? Really now?!’ at the computer and then click on the little red cross in the top left hand corner of the screen and go away and do something far more serious and crucial to your future writing career instead, like say re-sharpening all of your Blackwing pencils or rearranging your Post-It note collection.  But even if you have the very strong urge to do either of these things, try to squash them down for a few minutes at least, for this book could very well be the one that helps you write your first novel.

The book in question is called Save The Cat.  Running to 194 glorious pages it is written by one Blake Snyder and has a picture of a ginger cat on the front cover.  A ginger cat.  Swinging on a rope.  By its paws. 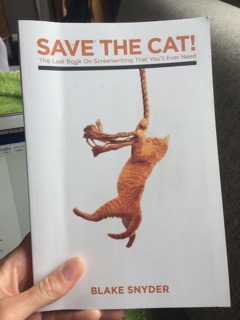 But don’t let that put you off because, dear reader, within the contents of this book are the building blocks that will help you figure out, structure and write your novel.  I promise.

When I first came across this guide I had a rough first draft of My Husband’s Son sitting on my hard-drive.  But the draft wasn’t working.  And no matter how much I tried, I couldn’t make it work.  Then, at lunch one Sunday, a screenwriter friend suggested I look to Save The Cat for inspiration.  I smiled politely, said I’d get right on it and reached for another roast potato.  But inside I was sceptical, VERY sceptical.  I’d read endless books on how to write a novel and most of them were total pants.  Still, I was desperate and once I saw that little thumbnail of the ginger cat on Amazon I was intrigued.  I clicked ‘Add To Basket’.

The book took me a few hours to get through.  Those few hours changed everything.  I now knew what I had to do to my plot and characters to make them zing.  Turns out a book about how to write screenplays with a kamikaze feline on the front cover was the answer to my prayers.

Why?  How?  What?  Has she been at the Sancerre again?

Okay, let me talk you through it.

The first great thing this little book does is make you be really super extra CLEAR on what your book is about: in the movie world this is called the logline.  I think of it more as the ‘Does-This-Novel-Actually-Have-Legs-Or-Is-It-All-Guff line?’.  I found the discipline of having boil my book down into a couple of sentences incredibly useful.  Not only does it force you to crystallise your idea, it also makes you tighten it, to make you get down to the bare bones of what your book is actually ABOUT.  On writing my second novel I’ve also discovered it can be invaluable when it comes to trying out different potential ideas and trying to figure out which one is robust enough to commit to (again, a VERY important thing….much better to realise early on that an idea is vague or complicated than when you’re 20,000 words deep into something you have to then suddenly abandon).

The next thing Save The Cat does is give you a template to work from.  Snyder calls this is his beat sheet.  Trust me, the beat sheet is your BEST FRIEND.  Again, these beats are designed to fit the grammar of a screenplay but I would highly recommend trying to fit the arc of your novel into those 15 beats and then working out from there.  Suddenly the 100,000 words you have to produce will not seem so scary.  (Okay, maybe they’re still a leetle bit scary).  The beat sheet gives you 15 key moments to hang your action around.  This is totally do-able.  Anyone can fill 15 index cards with stuff.  Not only that, it will give you a sense of what needs to happen when and why.

Last but not least this book will help you sort out your individual chapters.  Just like the logline Snyder gives you a discipline that you must apply to each scene and the importance of conflict in any one sequence.  Again, I found that when it came to rewriting chapters that were a bit lacklustre or seemed somehow pointless applying Blake’s little conflict test to it suddenly brought everything into very sharp focus and I was able to tweak them in such a way that they now brought something to the story and the pace of the novel that they didn’t before.

So there you have it.  My secret weapon.  Whether you’re just starting out with the germ of an idea and you’re not sure if it has the guts needed to sustain a whole novel or whether you are like I was, stuck on a first draft that you want to make better, this is the book for you.  A book that is actually about how to write screenplays with a ginger feline performing acrobatics on the front cover.  I know, right?

Okay, as you were.  You can go back to rearranging your Post-It note collection now.

PS. On closer inspection you will notice that afore-mentioned cat bears a striking resemblance to Jaffa (this blog’s namesake).  It is not for me, but Jo, to confirm or deny whether he is in fact one and the same stunt cat.

Deborah O’Connor read English at Newnham College, Cambridge, before going on to become a television producer. Having worked on everything from The Big Breakfast to Big Brother, she produced the BAFTA award-winning poetry documentary Off My Heart and is currently the head of factual development at TV production company, CPL.

Born and bred in the North-East of England, she now lives in East London with her husband and daughter.


Jaffa is keeping very tight lipped about what he gets up to away from the blog... 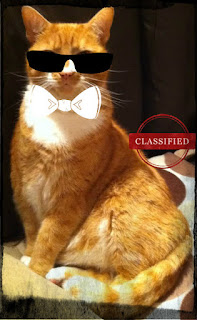