in The Weekend Wives is imaginary or real?

My new novel, The Weekend Wives, is a departure in that it’s set in the countryside rather than in London as were my previous four books. The village is almost an additional character in the book, its size and shape influencing the behaviour of those who live within it. 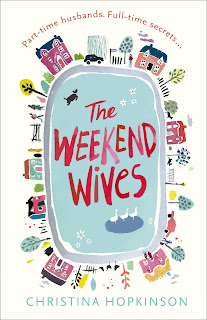 It’s a literary departure rather than a real-life one since I’m still sat here in the smog of the capital with no plans to move any further than from here to the kettle. I think that were we to have relocated it would have been while our three children were little, but now that the eldest is twelve that window has vanished (or at least been grimed over).

The book tells the story of three women who all have partners working away from the family home and the intrigue and secrets that this arrangement produces. They want the rural idyll, but need the income that comes from jobs further afield (in one case as far away as Los Angeles).

My editor asked me, given that I’m still stuck in a place where the ground is carpeted in urban dog poo rather than bluebells, whether the unnamed village in which all the action takes place was a real place or whether I had imagined it.

To which the answer is (as so often the case), well, a bit of both. I grew up just outside a Cambridgeshire village called Melbourn. Looking back it was almost more of small town since it had a couple of pubs, both a primary and secondary school and a mini shopping centre (post office, co-op, butchers). The Weekend Wives village is much smaller than this and suffers from lacking Melbourn’s hub of shops and schools. We were also closer to London than my fictional village, well within a reasonable daily commute.

But I do remember the way that we spent much more time in the car than my children do, that a walk was something quite specific and muddy rather than just the usual method of getting around. My parents knew a lot of people in the village but had far fewer close friends than I think I do in my neighbourhood of North London, instead travelling across the county in their estate car to various dinner parties and drinks.

So my fictional village draws on Melbourn, but I’ve set it further away from the city. I wanted it to be somewhere pretty and rural, but not chi-chi. It wasn’t to be one of those country areas that lifestyle magazines say rival London in their hipness, art galleries and restaurants. The village in my head was nowhere near a Soho-House offshoot or Lady Bamford’s farm shop.

That means, to me, the West Country is out and with it the tourist destinations of Dorset, Devon and Cornwall as well as Gloucestershire and Oxfordshire. No, in my imaginary move out of London I’ve gone north, but not so far that I’m in the north ‘proper’ with its independence and separateness. In my mental map I’ve driven 70 miles up the M1 and maybe off to the right a bit – perhaps Lincolnshire, Northamptonshire and Rutland.

In fact, I have even found my inspirational village in one of those places. It’s pretty, but not chocolate box, the right distance from an airport and crucially well over two hours door-to-door commute from a London office. It’s got a discreet charm, not wearing its loveliness like a gold velvet cloak like some of those Cotswolds villages do, beckoning to second-homers and weekenders. It’s so understatedly lovely that I find myself constantly checking out the market on Right Move and fantasy-relocating. Ooo, I think, look at all the loveliness we could afford if we moved there.

And for this reason, I’m most definitely not revealing the village’s name…

Weekend wife n. 1 a wife whose husband works away and only comes home at the weekends. 2 a wife who misses her husband when he's gone, but wants him gone when he's at home.

Emily's vision of country life was building dens with the children, walking a glossy hound and cosy nights in by the fire. But her kids are more interested in their smartphones, the family dog has 'issues' and she's permanently freezing. And when husband Matt is home, he still seems worryingly distant.

Sasha and her husband Ned used to have a great connection, but nowadays the only connection between them is via Skype. And when a woman from Ned's past comes with news that threatens the perfect life she's built for her children, Sasha feels further from her husband than ever before.

Tamsin's husband might be away during the week, but he's never truly gone. He seems to know her every move, which is fine, sort of - until her first love reappears in the most mysterious of ways...

My thoughts about The Weekend Wives..

There is a vision of an idyllic country life which exists in the imagination, and yet, for the weekend wives of a small village, some 99.7 miles from London, the reality of living a weekday life away from their husbands proves to be quite the opposite of peaceful.

When I first started to read The Weekend Wives I thought the story was going to prove to be a little bit fluffy and rather too light-hearted but, as the story got under way, it became more serious and touched on some quite significant marital problems, all of which were handled in a thoughtful and meaningful way. For Sacha, Emily and Tamsin, the reality of coping alone is tinged with undeniable complications. There are regrets and lots of hidden secrets, but their shared experiences and the formation of the weekend wives club gives them a means of support and a shoulder to cry on when they need it most.

I’ve never been a weekend wife, so I was interested to see what difficulties lay ahead for this trio of women all of whom come to the story with a realistic story to tell. I think my favourite was Sacha, who seemed to be the most balanced of the threesome and the way she dealt with her problems, perhaps, for me, seemed to be the most convincing, and yet,  I had immense sympathy for Emily and Tamsin, and perhaps, more particularly for Tamsin who seemed to have been dealt the worst of deals. I found that as I became comfortable with the characters and their emerging stories, I began to feel an emotional attachment to them, and wanted their lives to work out well. I was less enamoured of the three husbands who seem a sorry lot and quite undeserving of this trio of strong and brave women.

Overall, I thought that this was a well written story with a modern edge. The author delivers a serious story which touches on some complex issues but does so with light hearted humour and a fine eye for detail.

It must also be said that I had a particular fondness for Rafa, who had his own problems to overcome.

Christina Hopkinson is an author and journalist whose work has appeared in the Daily Telegraph, the Guardian, the Times and Red magazine. She lives in London with her husband and three children.,

My thanks to the author for this guest post and to the publishers for their invitation to be part of the blog tour.

Thanks also to Rebecca for her help with this guest post and for sending me a copy of the book to review.