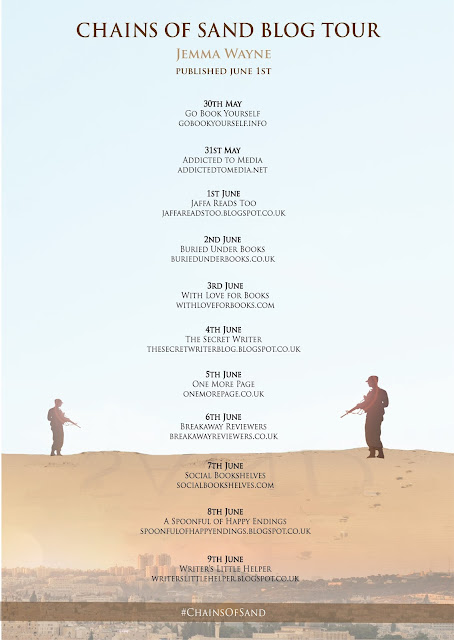 Jaffareadstoo is thrilled to be part of the

I am delighted that you are spending some time with us today and a very Happy Publication Day to you for Chains of Sand.

Tell us a little about Jemma Wayne, author.

I think I have always written. I remember being aged five or six and stapling bits of paper together to create ‘books’ I’d fill with stories and then try to flog to relatives. And as a child I had two clear ambitions: to win a gold in the Olympics, and to be an author. When I left university however it occurred to me that declaring myself a writer wasn’t really a job, so I started off in journalism, which was a great foundation for everything that has come since. After working as a staff reporter for a year, I found that I couldn’t escape the urge to write the fiction that was constantly bubbling inside my head, so I decided to go freelance, started on a novel…and a short decade later(!), here I am…still chasing that illusive Olympic gold.

What inspired you to write Chains of Sand and what can you tell us about it that won’t give too much away?

Chains of Sand is about identity and truth. Set against the backdrop of Israel’s conflict with Gaza in 2014, it traces the parallel stories of two men: Udi, a 26-year-old veteran of the IDF who wants to leave Israel and move to London; and Daniel, a similarly aged British Jew who wants to emigrate to Tel Aviv. Alongside this is a tale of forbidden love set in Jerusalem a decade earlier between a Jewish girl and an Arabic man. Amidst chaos in Israel and a surge of antisemitism in London, these different characters attempt to unpack their identities, and the book asks the question not what is the truth of the conflict, but is there a truth, whose truth is it? The main inspiration for me was the climate surrounding the war in 2014. Israel is always a polarising issue, it pushes people towards extreme views, but I began to see a certain triumphalism everywhere: people on both ‘sides’ losing their ability to empathise, to listen, to even for a moment put down their rigid arguments, their passionate ‘truths’ and attempt to judge the morality of their own ‘side’s’ actions. For me this was a dangerous, complicated, fascinating dynamic. And something I wanted to explore.

I’ve been both. My first foray into writing a novel had no plan, no structure, little research. I started at A and I finished at B. It was raw, at moments surprising, and both better and worse for its lack of plotting. Since then, I’ve slowly grown into a fastidious plotter. I adore the research side of the process. I love gathering facts and insights and ideas. I love developing characters. And then I carefully plot the main events of each chapter, before lifting my metaphorical pen. At times however, there are still surprising moments – times when a character or an event begins to take on its own life and goes off in a tangent I never expected. These are my favourite parts, the best bits. But I think they come from and not in spite of the plotting.

The topic is very controversial, very emotive, and I couldn’t help being aware of this while I was writing. I was anxious for that awareness not to impede the truth of the characters or the story, so hopefully I have accomplished this. During my research too, there were a lot of difficult questions I had to put to people – for example asking an Israeli soldier what it felt like to kill somebody, or what he was thinking when a bomb amputated his leg. But I hope that these challenges make the writing more visceral.

What do you hope that readers will take away from Chains of Sand?

Questions. Questions about the huge mass of grey within the black and white framework through which this conflict is usually viewed.

My first book, After Before, was longlisted for the 2015 Baileys Women’s Prize for Fiction, and is available on Amazon and at various bookshops. For journalism and other info, readers can have a look at www.jemmawayne.com

Chains of Sand is published by Legend Press on 1st June (Paperback £9.99), buy your copy here. 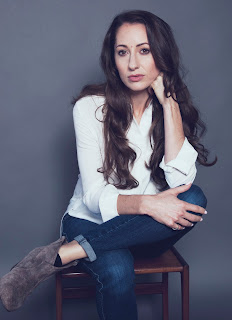