When a woman's body is found in a quiet area of Hampstead, the investigative team suspect that it is the work of the serial killer they have been chasing for the last couple of years. The killer's modus operandi seems to be identical, and yet, the anomalies which appear in the investigation seem to provoke more questions than they do answers. Desperate for a result, a profiler is brought into the team to add another perspective, and suddenly, buoyed on  a wave of enthusiasm, the case seems to take off and before long is ready to reveal its secrets.

What then follows is a crime procedural story with a rather unusual twist, in that parts of the novel hark back to the golden age of detectives stories, with the author very much in tune with the work of Agatha Christie, Dorothy L Sayers, and Marjory Allingham.  The sharply observed elements of classic detective stories adds a quirky twist and I found myself discovering some hidden gems hidden away in the narrative which were so reminiscent of the old classic detectives.

I enjoyed getting to know the police team, and found the complicated dynamics between the different characters interesting. They seem an odd bunch of people to be thrown together but yet when the chips are down they all seem to be able to pull together, with the exception of an old school copper who seems determined to do things his way. The main premise of the plot seems a little fanciful, at times, but I think this is entirely appropriate given the style of writing and its particular genre of old fashioned cosy crime.

The author has an interesting writing style, drawing the reader into the story with gentle humour and a wry wit which makes a refreshing change. Death in Profile is the first title in a proposed new cosy crime series and I look forward to reading more in the Hampstead Murders series.

Best Read with …. A pint of London Pride and a chicken pie …

Guy Fraser Sampson is an established writer best known for his Mapp and Lucia novels which have been featured on BBC radio and optioned by BBC television. This is his debut work of detective fiction and the first in the Hampstead Murders series. 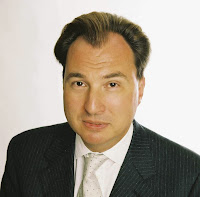 
My thanks to the author for sharing his novel with me.