The author in my spotlight is ... James Wilson


A powerful novel of friendship, rebellion and betrayal...

England, 1950s. While out playing in the woods, ten-year-old Mark meets a man living in an old railway carriage. Despite his wild appearance, the stranger, who introduces himself as Aubrey Hillyard, is captivating – an irreverent outsider who is shunned by Mark’s fellow villagers, and a writer to boot. Aubrey encourages Mark to tell stories about his own make-believe world, and in return he informs the boy about a novel he is writing – a work of ominous science fiction.

As the meddling villagers plot to drive Aubrey out, Mark finds himself caught between two worlds – yet convinced that he must help Aubrey prevail at any cost.

James ~ welcome to Jaffareadstoo and thank you for answering my questions about your novel,  The Summer of Broken Stories...

What inspired you to write The Summer of Broken Stories?

The popular view of Britain in the 1950s sees it as a dull, grey, conformist place – little more, really, than a kind of monochrome prelude to the psychedelic explosion of the 1960s. But I was a child then, and that’s not how I remember the period at all. And I wanted to capture something of what it actually felt like – or at least, what it felt like to me, growing up then.

But the world I was trying to recreate wasn’t just some kind of lost idyll. Beneath the superficial calm there was an underbelly of anxiety – expressed in comics, or on TV, or in the work of novelists like John Wyndham. And what struck me, looking back, was that – for all that in many ways that world feels remote now – the sense of unease you find in these stories still links it, in unexpected ways, with the world we live in today, the stories we tell ourselves now, more than fifty years later. And it was this that gave me the second strand of The Summer of Broken Stories.

It’s narrated from the point of view of ten-year-old Mark, who – while he’s out with his dog one day – finds a strange man called Aubrey Hillyard living in a disused railway carriage in the woods. Hillyard is writing a science fiction novel about a sinister entity called The Brain, and does a deal with the boy: he’ll tell Mark about The Brain, if Mark will tell him stories about the fictional world of his model railway, Peveril on the Swift. This seemingly innocent encounter ultimately changes the whole course of Mark’s life.

The Summer of Broken Stories is a story about friendship and betrayal – in your research for the novel, did you discover anything which surprised you?

As I said, I – just! – remember the 1950s, so it required less research than my other books, all of which are set in earlier periods. The biggest surprise, I think, was to realize just how much freedom children had then, compared with their modern counterparts. One of the characters in the book – an elderly woman who, during “tea”, plies Mark with home-made country wine – is closely modelled on someone who treated the ten-year-old me in exactly the same way. Today, I imagine, she might well be had up for supplying alcohol to a child.

I first wanted to be a writer when I was five. If someone had told me then how long I would have to wait to see my first book in print, I’d have been devastated! I started with non-fiction, and then – by a slightly circuitous route – made my way back to my first love, the novel.

What do you hope young readers will take away from this book?

Although it’s narrated from a child’s perspective, The Summer of Broken Stories isn’t intended specifically for young people. I hope – as I do with all my novels – that it takes readers into an unfamiliar world, and shows them there something that they recognize, from their own experience, to be true.

It’s set in the 1960s – so, chronologically, a sort of extension of The Summer of Broken Stories. But the similarity ends there: the new book is told from a number of different points of view, and centres on the life of a young singer who disappeared mysteriously in 1970. I don’t want to say a lot more at this stage – except that I’m very excited about it! 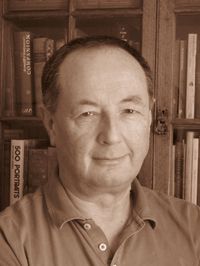 Huge thanks to James for spending time with us today and also to Thomas at Alma Books for his help with this interview.