Jaffareadstoo is thrilled to host today's stop on 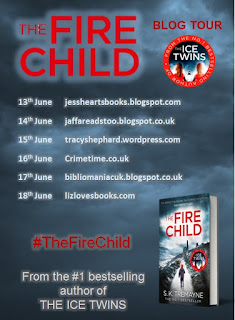 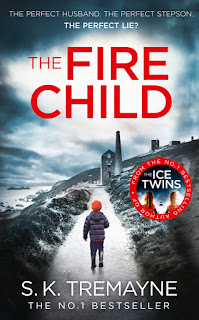 Published on the 16th June 2016 by Harper Collins Publishers

When Rachel marries dark, handsome David, everything seems to fall into place. Swept from single life in London to the beautiful Carnhallow House in Cornwall, she gains wealth, love, and an affectionate stepson, Jamie. But then Jamie’s behaviour changes, and Rachel’s perfect life begins to unravel. He makes disturbing predictions, claiming to be haunted by the spectre of his late mother – David’s previous wife. Is this Jamie’s way of punishing Rachel, or is he far more traumatized than she thought?

As Rachel starts digging into the past, she begins to grow suspicious of her husband. Why is he so reluctant to discuss Jamie’s outbursts? And what exactly happened to cause his ex-wife’s untimely death, less than two years ago? As summer slips away and December looms, Rachel begins to fear there might be truth in Jamie’s words:

‘You will be dead by Christmas.’

Here are my thoughts about The Fire Child


Firstly, there is something quite compelling about the cover of the book. The colour pop of red really stands out and succeeds in drawing your eye into the heart of the novel and focuses on the Morvellan tin mine which stands on the cliff at Penwith in Cornwall. So, keep this cover in mind, its important.

We pick up the story 178 days before Christmas which you might think is an odd place to start but stay with this idea, as the numerical countdowns which head each chapter start to take on a very sinister importance. We meet Rachel, and her handsome and charismatic husband, David, at Carnhallow, their beautiful home in Cornwall, and initially all seems idyllic with their new marriage, which is Rachel’s first and David’s second, and which has come about due to the tragic loss of David’s first wife, Nina. Rachel tries to be the best wife and step-mother she can be, but from the outset this seems difficult, and Rachel’s testing time with her step-son, Jamie, and her struggle to find her place at David’s side, gives the story a really interesting perspective.

What I loved most about The Fire Child was the way in which I was drawn, imperceptibly, into Rachel’s world. We see everything from her perspective; we walk the house in her shadow and experience everything as she sees it. Gradually, though and very slowly, the fragments of Rachel's life starts to be eroded and it becomes very noticeable that all is not going well at Carnhallow. The creepy edginess of the house comes alive, its dark and shadowy recesses, its hidden memories, which, when combined with David’s indifference, Rachel’s anxiety and Jamie’s unsettling behaviour, helps to crank the tension up to high.

The idyllic setting of Cornwall, with its rugged landscape and its history of tin mining, so reminiscent of Poldark, or the stories of Daphne du Maurier, really comes alive in a story which grabbed my attention from the very beginning and which  held me in its grip until I had read on, in the space of a couple of afternoons, to its dramatic conclusion. There is a real dark edginess to this novel which in a way took me by surprise as I wasn't expecting it to be so creepy, but I found myself jumping at shadows and started looking just a little more closely into dark corners and wondered many times why Rachel didn't just pack her bags and get the hell out, but of course, why she doesn't leave, is the reason why you need to read The Fire Child for yourselves.

Best Read with....Glasses of tawny Port and cheap lemonade and a comforting hand to hold...

S. K. Tremayne is the bestselling author of THE ICE TWINS, an award-winning travel writer, and a regular contributor to newspapers and magazines around the world. Born in Devon, the author now lives in London. S. K. Tremayne has two daughters.