Blog Tour ~ The Weekend Away by Sarah Alderson ☼

☼ Excited to be hosting a stop on this Blog Tour today ☼
Two friends go on holiday. Only one comes back.
Orla and Kate have been best friends forever. Together they’ve faced it all – be it Orla’s struggles as a new mother or Kate’s messy divorce. And whatever else happens in their lives, they can always look forward to their annual weekend away.
This year, they’re off to Lisbon: the perfect flat, the perfect view, the perfect itinerary. And what better way to kick things off in style than with the perfect night out?
But when Orla wakes up the next morning, Kate is gone. Brushed off by the police and with only a fuzzy memory of the night’s events, Orla is her friend’s only hope. As she frantically retraces their steps, Orla makes a series of shattering discoveries that threaten everything she holds dear. Because while Lisbon holds the secret of what happened that night, the truth may lie closer to home…
What did I think about it..
The Weekend Away is a real roller-coaster of a ride as from the very start of the novel we are thrown right into the very centre of the action when Kate goes missing on the first night of weekend away in Portugal with her best friend, Orla. The two girls have enjoyed a rather lively night out in the bars of Lisbon but when Orla wakes the following morning, with a hangover from hell, Kate is nowhere to be found. Orla only has a sketchy memory of what actually happened and from her frightening recollections it doesn't bode well.
What then follows is a tight and dramatic thriller in which Orla, with the help of an unexpected ally, sets out, despite police indifference, to discover just what has happened to her friend.
This story is the stuff of nightmares and as Orla gets drawn deeper and deeper into the mystery so the danger starts to escalate for her too. I must admit that I read the story with bated breath desperate to find out more and yet, scared of the outcome. With the tension cranked up to high I found the story difficult to put down and have to admit that I read the whole thing through in one sitting. The ending left me reeling.
If you like a tense and drama filled holiday read than The Weekend Away is great escapism but perhaps not one to read if you are heading to Portugal with your best friend, nevertheless it's definitely an exciting, edge of your seat sort of read for a lock down summer.
About the Author
Twitter @sarahalderson #TheWeekendAway 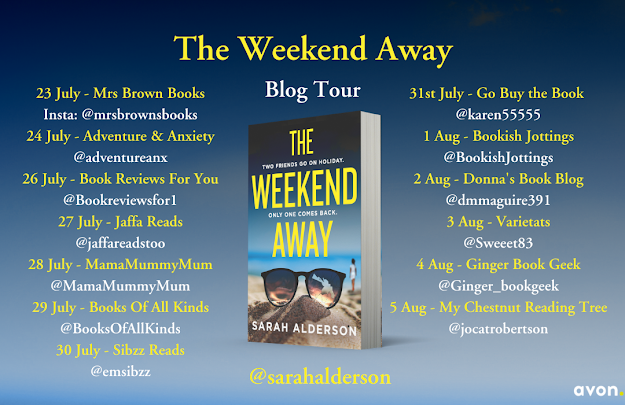