On Hist Fic Saturday
☼ I'm thrilled to host one of today's stops on this blog tour ☼
Rose’s Choice is a heart wrenching wartime saga of love, family and secrets.
Rationing, bombing, disease and pit disasters are part of Rose Kelly’s World War 2 childhood. When the spirited coal miner’s daughter discovers a family secret, she makes a choice that over shadows her teenage years. Rose tries to make the most of post war opportunities but family tragedy pulls her back to a life in the colliery rows. She relinquishes her bright future for domestic duties because her family comes first. Will family ties get in the way of her dreams?
📖 I'm delighted to share this tantalising extract from Rose's Choice 📖

‘Rose’s Choice' by Chrissie Bradshaw is set in a small Northumbrian mining community during World War This heart wrenching family saga is told from Rose’s point of view..

The extract below follows a major falling out, in the middle of the book, between twenty year old Rose and her father.

From her bedroom window, Rose watched the first rays of morning lighten the strip of sky that sat above the neatly lined slate roofs of the rows. Like one of Dad’s palettes, streaks of navy and indigo merged into cobalt and sapphire. Soon they’d give way to silver and steel and the house sparrows would start their chirping.

She hadn’t slept, hadn’t even undressed. An hour ago, she’d nipped to the outside toilet then darted back indoors to light the fire in the kitchen before making a brew and preparing Dad’s work bait, a slice of bread and dripping wrapped in paper. The tea was masting in the teapot, keeping warm by the range for Dad. She’d brought herself a cup upstairs because she didn’t want to bump into him before work yet she couldn’t let him go down the pit on an empty stomach.

Had he meant all he said to her, last night? His words had scalded her heart. He’d been so upset and angry and hadn’t come home until well after midnight, his footsteps slow and weary as he trod upstairs. Had he slept? He would be up and leaving for his shift soon.

From the window, in the murky morning light, she saw the first outlines of miners trudging to work. Whatever their troubles at home, the cage dropped them underground and they put their lives to one side. To do their job in the bowels of the earth, pitmen needed their wits about them and all their senses fully functioning.

Every creak and sound alerted Rose to what her dad was doing, getting dressed, drinking a mug of strong tea and then opening the door to go to the pit. Her fingertips touched the hard barrier of glass as he appeared on the street below. She wanted to reach out as he merged into the work pool with the others. As he disappeared into a stream of miners heading towards the big pit wheel, tears ran down her cheeks. Fancy her dad thinking she had betrayed him. Was there nothing she could do or say to take that hollow look out of his eyes?

He’d been deceived by her as well as Mam. At times, she’d hated her mam for forcing this secret on her but never so much as now. How could you ever think you’d get away with such a plan, Mam? Yes, she hated her all right but she missed her and loved her too. 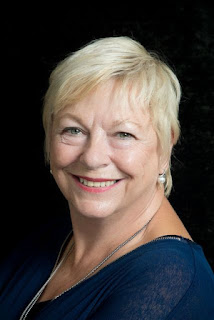 Chrissie, 2016 winner of the Romantic Novelist's Elizabeth Goudge writing trophy, is a seasoned tea drinker and a tenacious trainer of her welsh terrier, Oscar. She has always loved matchmaking a book to a reader. Writing the kind of book she loves to read takes this a step further. She has written two contemporary sagas, A JARFUL of MOONDREAMS, a contemporary story about family relationships, secrets and how dreams can come true, and THE BARN OF BURIED DREAMS, a contemporary story about two sisters who are struggling after the death of their mother. ROSE’S CHOICE is her first historical saga and is set where Chrissie lives in Northumberland. When she is not writing or reading, you will find Chrissie walking Oscar on the beautiful Northumbrian coastline, travelling or spending time with her family and friends.
Twitter @ChrissieBeee
Instagram
Facebook
Amazon UK
@rarraresources