A mesmerising and epic literary novel set between the wilds of Siberia and the UK about mothers, daughters and the wild side of female nature, from the prize-winning author of Larchfield

Frieda is a primatologist, sensitively attuned to her research of animal behaviour. A violent attack shatters her world and, battling addiction and her fears, she must start afresh at Torbet Zoo as they prepare to welcome their new ward: a magnificent Siberian tiger.

Tomas is a Russian conservationist, steward of one of the world’s harshest environments, who fears that the natural order of the forest has been toppled. The King tiger has been killed by poachers, and a spectacular tigress now prowls his vast territory.

In the freezing winter, when all living things compete ruthlessly for survival, the tiger’s path crosses with a native mother and daughter eking out a defiant but perilous existence in the snow-shrouded wilderness. To control her domain, the Undeghe people tell tales of how the tiger must punish every infraction. They bear grudges. They never forget. They will kill those who try and fail to kill them.

The fourth and final narrative takes the reader deep into the world of the tiger herself. A magnificently immersive reading experience, Tiger plunges the reader into one of the world’s last surviving wild places with blistering authenticity.

Tiger is a bewitching novel that brings together three humans and a tiger (and - soon - legions of enchanted readers) in the snow-smothered Siberian forest.

There's such a stark beauty to Tiger, that at times the narrative quite took my breath away, not just because it gets right into the very core of those who survive in the ice of the Siberian wilderness, where this magnificent creature calls home, but also because of the perceptive interpretation of those who are so passionate about animal conservation, to the exclusion of their own safety.

The story follows three characters, Frieda, is a primatologist, who has been damaged by an incident in her past and yet, her unique ability to communicate with animals, will be her salvation. Tomas is a Russian conservationist who coexists with the Siberian tiger in a tough environment which fairly crackles with ice and frost. Edit is an Udeghe huntress whose ability to eke out an existence in an area where the majestic tiger rules supreme makes for absolutely compelling reading.

The author writes beautifully about something she feels so passionate about and her impeccable research into the Siberian tiger truly brings this creature to life in a way that most of us will never get to witness. Getting into the mind-set of this magnificent animal is not an easy task and yet, the chapters which track the bold savagery, and the utter vulnerability, of this big cat is really quite special. Tiger is divided into sections, each one blending quite seamlessly, and yet, they each have a very different atmosphere and bring something completely unique to the story, so that I always felt like I was being given a privileged glimpse into a secretive world.

I devoured Tiger in a couple of reading sessions because I couldn’t put the book down, becoming so engrossed in the story that when I looked up from the page it took me a while to realise that I wasn’t still deep in the freezing temperatures of the snow forests of the Russian Taiga.

Polly Clark was born in Toronto and lives in Helensburgh on Scotland’s West Coast and on a houseboat in London. Her four poetry collections have between them won the Eric Gregory Award, been shortlisted for the TS Eliot Prize and the Michael Marks Awards, and selected twice as one of the Poetry Book Society’s books of the year. Her first novel Larchfield won the MsLexia Novel Prize and was published in 2017 to critical acclaim.

Polly has worked as a groom for showjumpers, a volunteer ranger for the Wildfowl Trust and as a zookeeper at Edinburgh Zoo. Whilst at the zoo, she became fascinated by animals that retain their true wildness even in captivity, the greatest of these being the tiger. 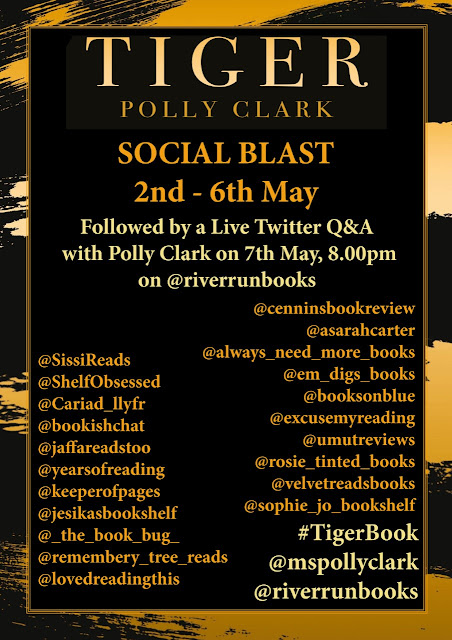