Blog Tour and Giveaway ~ A Long Shadow by Caroline Kington

When farmer Dan Maddicott is found shot dead in one of his fields, he leaves behind a young family and a farm deep in debt. Although the coroner records accidental death, village rumours suggest he has taken his own life so that the insurance payout can save his family from ruin.

Dan’s wife, Kate, refuses to believe the gossip and is determined to prove to herself, and her children, that his death was an accident. But could it have been murder? Kate discovers a set of old diaries containing secrets that may reveal how Dan really died.

Set against the backdrop of the farming crisis of the turn of the millennium, Caroline Kington’s absorbing family drama also tells the secret history of another resident of the farm, decades before, whose tragic tale will come to have major repercussions in the present day.

Widowhood does not come easily for Kate Madicott as she is not convinced that her young husband's death was entirely an accident. Taking over the running of the family farm with all that entails gives Kate a glimpse into what has happened before, and with her present very much bound up with secrets of the past, Kate finds, to her cost, that there is so much more to Dan's death that she could ever have imagined.

I've really enjoyed this complex family drama and I soon became engrossed in the story of Watersmeet Farm and its place in the local community. The realistic characters add an authentic feel and the long shadow which is cast throughout the whole of the story is nicely explained and gives the story an edginess  and a real sense of mystery.

The huge farming dilemmas of the early part of the millennium is particularly well done and explains both the emotional and psychological effects of rural tragedy on the farming community and of the genuine terror of financial ruin and losing livelihoods which had been in families for generations.

A Long Shadow is a beautifully written family saga by a talented author who really knows how to keep the reader engrossed. The story draws you in from the beginning, with characters who soon become as familiar as friends, and who, you hope, will find the answers to the dark mystery which threatens to engulf them all. 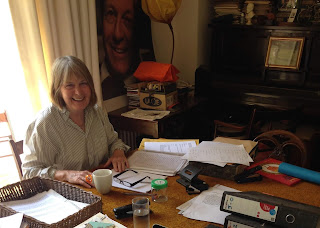 Caroline Kington spent most of her working life in theatre and television, as a director, producer and founder of the fringe theatre company Antidote Theatre.

Since the death of her husband Miles Kington, the columnist and broadcaster, she has posthumously published three of his books: a humorous memoir of his illness, called How Shall I Tell the Dog?; a collection of his columns and other writings, The Best By Miles; and a collection of his celebrated ‘Franglais’ columns that had not appeared in book form before, Le Bumper Book of Franglais.

In her own right, she is the author of the Summerstoke trilogy of rural comedies. She insists that no character in the series is based on anybody from the small village near Bath where she has lived for many years. Nobody believes her.

Her novel A Long Shadow had its origins in a feature she made for Channel 4 News at the turn of this century about the pressures on farmers as a result of BSE and foot-and-mouth disease.

*Terms and Conditions –UK entries welcome. Please enter using the Rafflecopter box below. The winner will be selected at random via Rafflecopter from all valid entries and will be notified by Twitter and/or email. If no response is received within 7 days then Rachel’s Random Resources reserves the right to select an alternative winner. Open to all entrants aged 18 or over. Any personal data given as part of the competition entry is used for this purpose only and will not be shared with third parties, with the exception of the winners’ information. This will passed to the giveaway organiser and used only for fulfilment of the prize, after which time Rachel’s Random Resources will delete the data. I am not responsible for despatch or delivery of the prize.