My name is Lydia. I’m 12 years old. I’m not an evil person, but I did something bad.

My name is Maddie. I’d never hurt my son. But can I be sure if I don’t remember?

With three children under ten, Maddie is struggling. On the outside, she’s a happy young mother, running a charity as well as a household. But inside, she’s exhausted. She knows she’s lucky to have to have a support network around her. Not just her loving husband, but her family and friends too.

But is Maddie putting her trust in the right people? Because when tragedy strikes, she is certain someone has hurt her child – and everyone is a suspect, including Maddie herself…

THIS IS THE STORY OF EVERY MOTHER’S WORST FEAR. BUT IT’S NOT A STORY YOU KNOW… AND NOTHING IS WHAT IT SEEMS.

There are so many secrets in Picture of Innocence that right from the very start of this clever psychological suspense novel things aren't what they seem.

Maddie is a struggling mum of three, trying to keep her home and animal sanctuary business afloat, however, it's not easy when your youngest child is constantly screaming with colic and the two older children still need your undivided attention.

Interspersed with Maddie's story is that of Lydia whose own rather complex life gives the book a decidedly chilly edge and which adds a whole different dimension to the story, and that's when things start to get really interesting...

Picture of Innocence is a cleverly plotted psychological drama which bears all the hallmarks of this author's ability to bring complicated family dynamics to life in such a totally absorbing way. There is so much to take in, and such heart break along the way, that I needed to take a break from time to time, but then eager to see how Maddie's and Lydia's story played out I had to keep on reading.

There are twists and turns in abundance and moments within the story that I genuinely didn't see coming, especially the ending, so all credit to the author for keeping me guessing throughout the whole of this clever and rather scary story.

Tess Stimson is the British author of ten novels, including top-ten bestseller The Adultery Club, and two non-fiction books, which between them have been translated into dozens of languages. Her first "proper" job after graduating from St Hilda's College, Oxford (where she read English) was as a news trainee with ITN (Independent Television News). She reported and produced regional and world stories, travelling to hotspots and war-zones all over the globe.

In 2002, she was appointed Professor of Creative Writing at the University of South Florida and moved to the US. She now lives and works in Vermont with her husband, Erik, their three children, and (at the last count) two cats, three fish, one gerbil and a large number of bats in the attic. 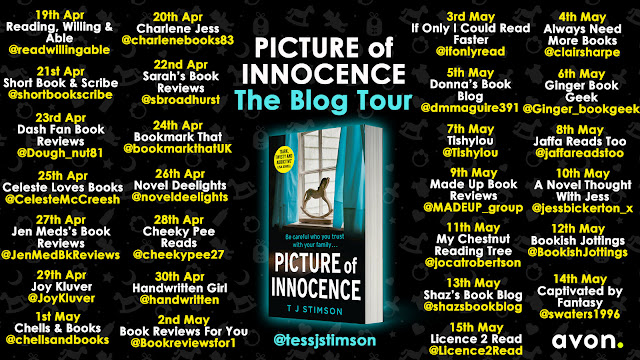