Rejected by her family and plagued by insomnia, Rose Shaw is on the brink . But one dark evening she collides with a man running through the streets, who quickly vanishes. The only sign he ever existed – a journal dropped at Rose’s feet.

She begins to obsessively dedicate her sleepless nights to discovering what happened to Finn Matthews, the mysterious author of the journal. Why was he convinced someone wanted to kill him? And why, in the midst of a string of murders, won’t the police investigate his disappearance?

Rose is determined to uncover the truth. But she has no idea what the truth will cost her…

What a roller coaster of a ride this turned out to be, from its dramatic opening, to its intricate middle and jaw dropping conclusion, there is never a moment when the plot doesn't keep you on the edge of your seat.

Rose Shaw is a really troubled soul and with very good reason as she has suffered more than enough tragedy in her life to justify her sleepless nights. At the start of the story, Rose feels that she has no purpose and we meet her with her family life in complete disarray. Late one night she inadvertently collides with a man who seems to be running away from something, in the aftermath of this altercation, Rose discover that the man had dropped a journal. Looking through this rather personal journal Rose discovers the story of a young man called Finn who has a nightmare of a story to share.

What then follows is a fast and furious psychological thriller which takes Rose to the very edge of despair and causes catastrophic rifts ,not just with her family but also with the local police force whose helps she seeks, but who seem intent to thwart her every move.

I thought that Night by Night was a really clever thriller, there are some genuinely sad moments which brought me to tears, and also some really dark situations which made me want to grab Rose and take her into safekeeping.

Thought provoking, hugely addictive, Night by Night kept me on the edge of my seat all the way through and, as this is the first book by this author I have read, it also introduced me to a wonderful new, and very original, writing talent.

Jack Jordan wrote his first novel at seventeen and self-published two e-book bestsellers, Anything for Her and My Girl, by the age of twenty four. He lives in East Anglia. 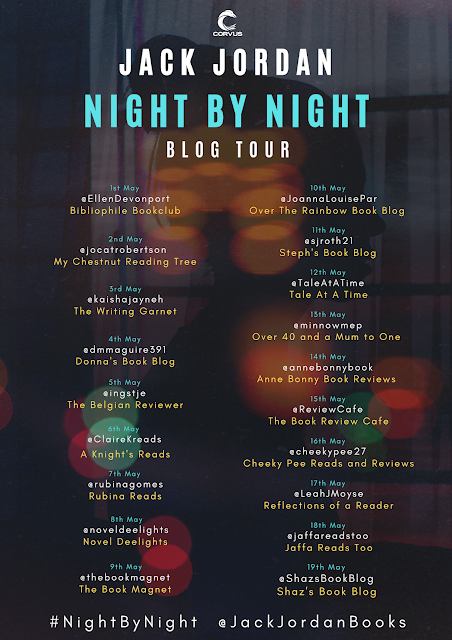