Jaffareadstoo is delighted to host day two of this blog tour


Hi Gail and welcome to Jaffareadstoo. What inspired you to write The String Games?

One of the worst experiences of my life was losing my three-year-old son for forty minutes on the beach at St Jean de Luz. I was rubbing sunscreen onto my daughter and when I looked up, he was gone. Although this episode ended happily it made me think about different possible outcomes, the vulnerability of little children in countries where they can’t speak the language, and the parental fear of losing a child. I decided this would be a good hook for novel readers but instead of telling the story from a parental perspective, I decided to explore the legacy of loss from the viewpoint of an older sibling.

Tell us three interesting things about your novel.

😊 there are characters who are strung along, others who are puppets on string and those who need to cut the apron strings – string is the controlling metaphor of the novel

😊in terms of structure and themes, The String Games has similarities with the Oscar winning film Moonlight

I started writing The String Games with an end in mind and could see the last chapter as if it were the closing shot to a film. However, the writing journey to get from start to finish was rather like entering a maze. Many chapters took circuitous routes, some paths led to dead ends where I had to backtrack, other chapters flitted around the outskirts and I needed to navigate a new path. When the first draft was completed, every subsequent draft (and there were many over the five-year period it took to finalise the novel) brought me closer to the heart of the novel and the completed story.

In your research for The String Games did you discover anything which surprised you?

When I began the novel I also enrolled on an MPhil programme with the University of South Wales. I enjoyed the practise of creative writing alongside academic study so much that when the two-year course was over, I transferred to PhD. The String Games became the creative element of my submission and I wrote a thesis to accompany this. One chapter of my research looked at feminist theories about women writers. In “On Female Identity and Writing by Women”, Judith Keegan Gardiner describes the relationship between women writers and their female protagonists by use of the analogy “the hero is her author’s daughter”. This caused me to reflect on my relationship as a writer with my protagonist and to build greater understanding and empathy for her mother, who is quite a tricky character.

I am the sort of writer who wears the shoes of my characters. When writing about devastating events, it’s inevitable to feel something of the characters’ pain. To avoid this spilling into my everyday life, I’ve developed the habit of closing my workroom door whenever I finish writing. This helps to separate the experience of engaging with the tragic events in my novel from my life with my family.

What do you hope that readers will take away from reading The String Games?

The String Games is a celebration of human resilience. It is possible for people to experience heart breaking events and become reconciled with those experiences.

I’ve got into some very bad writing habits. The other day I started a writing task at 8am and didn’t leave my desk until 2pm when I was absolutely famished. My writing life spreads into all aspects of daily living like some amorphous creature. I always have several writing projects on the go at any time so it’s more a question of finding time to do the necessary that keeps a home functioning rather than the other way around.

I share a desk with my husband and although he rarely works from home, his stuff takes up a lot of room. I pile all my notebooks and papers at one end and this has become my writing space. Once I’ve got my head down, it doesn’t matter that I’m in a tiny room. My writing takes me to many different locations.

I write a blog called The Writer is a Lonely Hunter which includes lots of information about me, my projects, publications and events. I’m also part of a collaborative writing trio called 3-She. Together we write short plays and comedy sketches. We’re currently working on a show that will be staged as part of the Shaftesbury Fringe. I’m active on social media so please find me on Twitter and Facebook.

Link to pre-order The String Games from Victorina Press

My thoughts about The String Games..

It's every parents' worst nightmare to have a child disappear, I can well recall that heart stopping, gut-wrenching feeling when my daughter, then aged six, went missing for about half an hour and the sheer relief when she was found safe and well.

The String Games reminds us of that feeling but it also cleverly focuses on the effects on the sibling in a missing child case, people who are, so often, overlooked, as so much emphasis is concentrated on the distress of the parents. Nim is only ten years old when her four year old brother, Josh, goes missing on a family holiday in France, and, whilst the impact of this devastating event on the parents is never underestimated, it is Nim's reaction to her brother's disappearance which becomes paramount to the story.

I found The String Games to be a very insightful family drama, which never over-sensationalises what has happened, but which looks introspectively into how much Nim suffered and of the grief and sense of loss that she carried with her and her need to have answers to so many unresolved issues. In a way The String Games is a rather poignant coming of age story as we witness Nim's constant search for resolution.

The author writes really well and the attention to detail and the authentic feel to the narrative make this a compelling and thought provoking read. 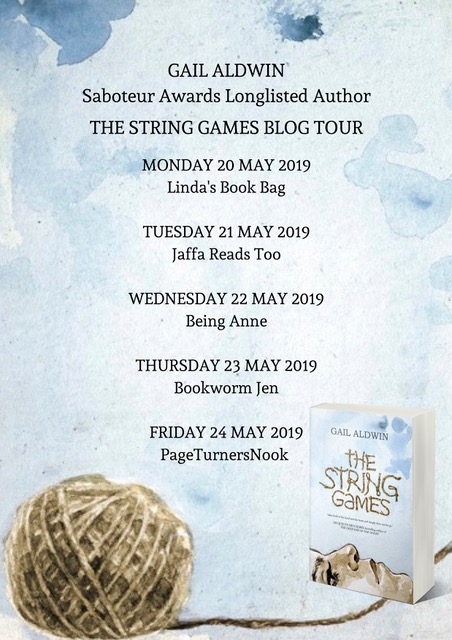