Blog Tour ~ Under the Rock by Benjamin Myers


In Under the Rock, Benjamin Myers, the novelist perhaps best known for The Gallows Pole,winner of the Walter Scott Prize for Historical Fiction 2018, returns to the rugged landscape ofthe Calder Valley in a bold and original exploration of nature and literature.

The focus of his attention is Scout Rock, a steep crag overlooking Mytholmroyd, where the poet Ted Hughes grew up. In solitude, Ben Myers has been exploring this wooded ten acre site for over a decade and his Field Notes, scribbled in situ are threaded between sections entitled Wood, Earth, Water and Rock. Taking the form of poetry, these Field Notes are “lines and lists lifted from the landscape, narrative screen-grabs of a microcosmic world that are correspondent to places or themes explored elsewhere, or fleeting flash-thoughts divined through the process of movement”

As a Lancastrian I have been well aware of that old adage that the only good thing to come out of Yorkshire is the M62, but having once spent several years living across the border in Leeds I am also aware of the unique charm of the county. In Under the Rock, the author explores the region around Scout Rock, near his home in Mytholmroyd, an area in Calderdale, West Yorkshire, a place which teems with a rich, and somewhat forbidding, heritage.

Under the Rock gets right under your skin as the author shows his love for this wild and untamed area in words which have a lyricism that so often matches the stark beauty of the landscape. From adventurous walks through the invasive confusion of Japanese Balsam, to the brooding nature of Giant Hogweed, this is not a place that instantly conjures picturesque beauty, however, the author’s undeniable skill with words brings the area to life in such a vibrant way that I feel as if I clambered Scout Rock along with the author and his dog, Heathcliff , as my guides.

The book is divided into five sections which each bring something very special to the mix with each section appropriately named, Wood, Earth, Water, Rock and Beyond which collectively shine a spotlight on an area which is both fascinating and disturbing in equal measure. I’m usually a bit of a butterfly when it comes to reading non-fiction and tend to dip into and out at whim, but rather unusually for me, I was so engrossed in the narrative that I read Under the Rock completely sequentially, from first page to last, without ever racing ahead to see what was coming up in another section.

The author’s ability to totally immerse the reader in his writing is what makes Under the Rock such a captivating read, and it really doesn’t matter if you’re not familiar with the landscape, although I would imagine that those who live in the shadow of Scout Rock will find much to identify with, however, even for this Lancastrian, who still has a great deal of affection for the county I once called home, Scout Rock, and its surrounding nooks and crannies, is all the more precious for being so magically brought to life by this talented author.

BENJAMIN MYERS was born in Durham in 1976. He is a prize-winning author, journalist and poet. His recent novels are each set in a different county of northern England, and are heavily inspired by rural landscapes, mythology,marginalised characters, morality, class, nature,dialect and postindustrialisation. They include The Gallows Pole,winner of the Walter Scott Prize for Historical Fiction,and recipient of the Roger Deakin Award; Turning Blue, 2016; Beastings,2014 (Portico Prize For Literature & Northern Writers’ Award winner), Pig Iron, 2012 (Gordon Burn Prize winner & Guardian Not The Booker Prize runner-up); andRichard, a Sunday Times Book of the Year 2010.Bloomsbury will published his new novel, The Offing,in August 2019.

As a journalist, he has written widely about music, arts and nature. He lives in the Upper Calder Valley, West Yorkshire,he inspiration for Under the Rock. 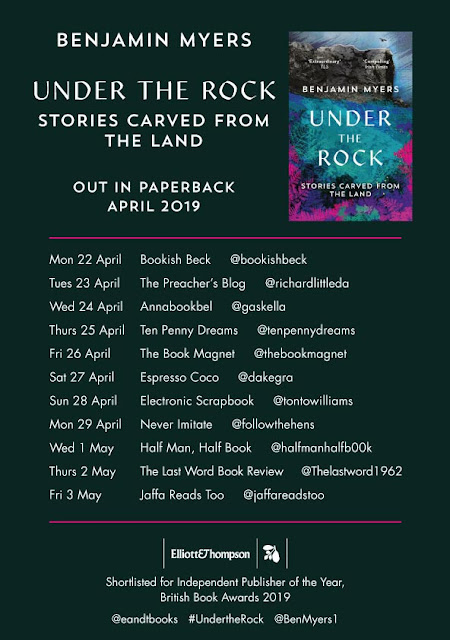