I'm delighted to welcome back to the blog the author 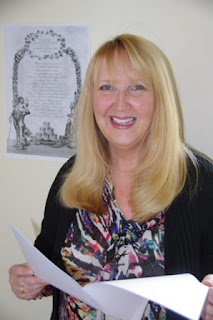 Welcome back to Jaffareadstoo, Martine. The Almanack is your latest historical fiction novel. What can you tell us about it that won’t give too much of the plot away?

The Almanack is a historical murder mystery set in an English village. Following a desperate summons from her mother, Tabitha Hart leaves her high-life in London for her home village of Netherlea - only to discover that her mother has allegedly drowned. Determined to discover the truth, Tabitha consults her mother's almanack and uncovers a series of cryptic notes describing her terror of someone she names only as 'D'.

The book explores Time, especially through traditional festivals occurring in the village, from harvest to All Hallows and eventually Christmas. Tabitha has to work out who is making predictions of a series of murders before the unseen killer reaches his victims - and eventually face the murderer alone.

It also features 50 historical riddles – one for each chapter – along with the solutions.

Tabitha Hart is one of the main protagonists of your novel, what can you tell us about her?

Tabitha has not always stayed within the law. She is strong-minded and can handle people but she also has her weaknesses. She’s sometimes vain and can charm men – but I hope my readers see she has a heart of gold beneath the surface.

She’s also very determined. Vowing to avenge her mother’s death, she takes on her mother’s former job as the parish Searcher, laying out the dead and entering the cause of death in the parish records. Using her charm and quick wits she works her way into the heart of Netherlea’s great estate, gaining access to rich and poor, cottage and Manor house.

I do start with a plan but I quickly try to flesh out my characters, because that’s where I think the energy of a novel really lies. I like using a screenwriting treatment to plot the whole thing into three acts. I don’t think you can write a twisty plot without an idea of where the story is heading. You need to hide some gunpowder on the trail so it can explode at the appropriate moment!

Once I get going I hopefully wake up each morning and see the characters acting out the scenes in my head. I jot down notes on each character’s appearance, traits, habits, and so on, and if all is going well they develop into three-dimensional people.

Would I let them dictate the story? Only if it made for a more exciting book. My characters are not in there to have an easy time! They have to have human failings and be brave and principled enough to see the mystery through to the end.

Where do you get your inspiration for your stories, and, as one book finishes, do you already have the idea in place for a new story?

This time I wanted to write about an isolated village and chose Cheshire and Chester, where I live. And the objects were Almanacks – little calendars with astronomy, astrological predictions and much more. I also have Tabitha pickpocketing a silver skull watch, based on a stunning memento mori said to have been owned by Mary Queen of Scots. 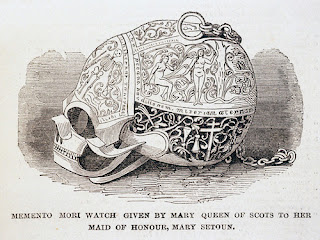 I don’t really have any idea of what I’ll write next as I finish a book. My head is usually too full sorting out the clues, mis-directions and red herrings. But soon a few little ideas start to surface and I get started again.

I am the sort of person who sometimes feels I’m more alive when I’m writing in the 18th century than when I return to the 21st century. Although it’s always a relief to finish a book I do miss the adventure I’ve just been on. But none of that bothers me; in fact I feel privileged. I started writing after a psychometric test told me I had a gift of imagination that I should be using, so I’m happy to have found my outlet.

The Almanack was especially interesting to me because I tried to follow almanack time for about a year. I wasn’t very good at telling the time by the Seven Stars (even with a modern app like Star chart), but I learned the phases of the moon and can now spot the major constellations. And in the evenings, instead of social media I looked up old riddles, which was great fun. 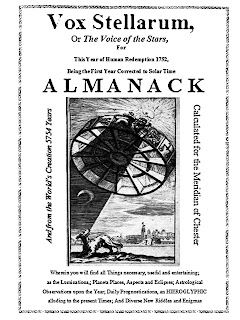 I live in a semi-rural village so thanks to almanacks I began to recognise the different crops growing around me, and noticed more plants and wildlife around me. Getting closer to nature and spending less time with technology inspired me and I also felt more mentally healthy. In fact I now send out a tweet with a little bit of ancient wisdom from old books from @AlmanackTweets every day.

You can read my review of The Almanack by clicking here