Review ~ The Woman in the Wood by Lesley Pearse

Fifteen-year-old twins Maisy and Duncan Mitcham have always had each other. Until the fateful day in the wood . . .

One night in 1960, the twins awake to find their father pulling their screaming mother from the house. She is to be committed to an asylum. It is, so their father insists, for her own good.

It's not long before they, too, are removed from their London home and sent to Nightingales - a large house deep in the New Forest countryside - to be watched over by their cold-hearted grandmother, Mrs Mitcham. Though they feel abandoned and unloved, at least here they have something they never had before - freedom.

The twins are left to their own devices, to explore, find new friends and first romances. That is until the day that Duncan doesn't come back for dinner. Nor does he return the next day. Or the one after that.

When the bodies of other young boys are discovered in the surrounding area the police appear to give up hope of finding Duncan alive. With Mrs Mitcham showing little interest in her grandson's disappearance, it is up to Maisy to discover the truth. And she knows just where to start. The woman who lives alone in the wood about whom so many rumours abound. A woman named Grace Dev

There's always something special about a new Lesley Pearse story and this, her twenty-fifth, novel is no exception. The Woman in the Wood gets off to a rather dark start when teenage twins, Maisy and Duncan Mitcham go to live with their curmudgeonly grandmother, who neither cares for them, or is interested in what they do with their time.  As Maisy and Duncan settle into their new environment, so they start go off independently, pursuing their own interests, making new friends and generally growing up. All is well, that is, until Duncan goes out on his bicycle and doesn't return home.

What then follows is a dark and disturbing story which looks right into the heart of a complicated family mystery. The more innocent time of the 1960s is perfectly recreated and the rather laissez-faire attitude of the police investigation certainly feels like it belongs to a less intrusive time, all of which makes the search for the missing boy all the more poignant.

As always, the author brings her characters to life in such a believable way that they literally jump off the page fully formed and ready for action,although it must be said that I liked some more than others. I felt an emotional connection to Maisy from the beginning, she's such a determined young girl, qick to action and not afraid to say what's on her mind. However, it is in the interaction of the other characters where the story really comes alive, particularly the scenes with Grace Deville, the eponymous Woman in the Wood.

There is no sign that this talented author is running out of ideas for novels and, most certainly, this twenty-fifth novel is right up there with the best of her stories. Long may they continue. 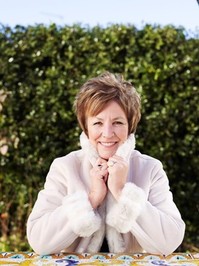