Blog Tour ~ Somewhere Beyond the Sea by Miranda Dickinson

Jaffareadstoo is delighted to be hosting the first stop on the

Somewhere Beyond the Sea  Blog Tour

I am delighted to have the author, Miranda Dickinson, as my guest today to tell me a little more about Somewhere Beyond the Sea

Miranda, welcome to Jaffareadstoo. Tell us a little about yourself. Have you always wanted to write and how did you get started?

I always wanted to write stories, from as soon as I realised you could make up your own. I remember asking my Mum, aged about five, if she thought our local library would put one of my books on their shelves – I think that was when I first started dreaming about being a writer! I wrote throughout my teens, but stopped for a while when a guy I fancied at college said he thought writing stories was childish (moral of this story: never listen to boys you fancy when you’re 18. They know nothing!)

In my late twenties a friend gave me a dinosaur of an old PC and I started writing what eventually became my first novel, Fairytale of New York. It took me eight years to write, on and off, mainly because for a long time I didn’t realise I was writing a novel. Then I decided to be brave and put it on Authonomy – a website for unpublished writers that sadly is no more. Within a month an editor at HarperCollins contacted me, asking for the full manuscript. Then, two weeks later, they offered me a three-book deal! Five Sunday Times Bestselling novels later I was able to become a full-time writer and that’s what I do now. I feel very lucky!

Without giving too much away, what can you tell us about Somewhere Beyond the Sea?

Somewhere Beyond the Sea is a love story, told from two characters’ perspectives – Seren MacArthur and Jack Dixon. Both of them have recently lost someone: Seren’s father has just passed away and left her trying to keep his seaside gallery in St Ives afloat; while Jack’s wife died seven months ago in a freak accident at work – she left him with their young daughter, Nessie, to look after and a financial mess that led to their home being repossessed. But their response to grief is very different. Seren is hurting and overwhelmed by what she’s been left with, Jack is angry and terrified he won’t be able to provide for his little girl.

Without realising, they become connected with a game on Gwithian Beach, just around St Ives Bay from the town itself. Seren, who beachcombs seaglass pieces from local beaches to make jewellery in her spare time, finds a star shape on the beach made of seaglass with one of its points missing. She completes it with the pieces she has found. Then, that evening, Jack and Nessie return to the beach to check on the star they made the night before, only to find it complete. Making and completing the seaglass stars becomes a lovely game that lifts Seren and Jack from the worries of their lives and gives them hope – a little bit of magic in their day.

Then, they meet in real life – but it’s on opposing sides of a debate that threatens to split the community of St Ives. Seren is leading the campaign her father started to save a local landmark, while Jack is working for the developer who wants to turn it into luxury apartments. They don’t know the other is their secret starmaker and both believe strongly in their side of the debate. Who will win? And will they discover the truth about the seaglass stars on Gwithian Beach?

I wanted to write a real love story, told from two sides. As a reader I love it when I get an insight into a story that its protagonists don’t yet see – I think it’s fun to see something unfold from two sides. Will they meet? Will they miss? Love it! But I also wanted to write a real love story – about ordinary people and life in all its chaos and messiness and beauty. So the story takes in grief (and how it affects everyone differently), the challenges of living and working in a seaside location, the importance of community, respecting the past and looking to the future. But at its heart it’s a story of hope, of finding magic and joy where you least expect it.

Whilst you are writing you must live with your characters. Do they ever dictate how the story progresses or do you stick with a writing plan from the beginning?

It doesn’t always happen that characters arrive immediately when I start writing a new book. Sometimes I have to hang out with them for a long time before I really understand what their story should be. With Somewhere Beyond the Sea, I wrote the first two chapters of the book to see if Seren and Jack worked – thankfully they appeared straight away and the opening chapters didn’t change between first draft and the finished book. That set the tone for the rest of the book, which was a lovely thing to happen.

Jack and Nessie arrived with a bang in their first chapter (Chapter 2 in the book) and Jack’s voice was very strong. Seren took longer because just before I began writing the book in earnest my lovely Dad passed away after a short illness. Writing about a character who has lost a parent when it’s just happened to you in real life is surreal and difficult. So while it didn’t change the story – I pretty much knew what was going to happen and the characters let me stick to it – it probably changed my approach to how I wrote it. A lot of Jack’s scenes with Nessie were written early on, mostly because they were fun to write and I could fully immerse myself in their lovely relationship.

Obviously Seren, for the reasons above. But I also identified with Jack and how he feels about being a parent. I have a four-year-old daughter, Florence, so a lot of the terror/joy/fun/fears Jack talks about chime with my experience of being Flo’s mum. I felt very much that Seren and Jack were like two sides of my personality: Seren for the inspiration she draws from the sea and beautiful St Ives and Jack for how he finds humour in every situation, no matter how scared he might be.

Somewhere Beyond the Sea is set in Cornwall. In researching the book did you visit any of the locations and did anything leave a lasting impression on you?

St Ives is my favourite place in the world and hugely important to my family, so I wanted to pour all my love for the town and Cornwall in general into this story. All the places named in the book are real and you can visit them, apart from a group of standing stones called The Maidens where Seren and her best friend Aggie have hung out since they were teenagers, and Bethel Parsonage, the local landmark Seren is trying to save. My favourite beach in St Ives is Porthmeor Beach, which is mentioned in the book. Our favourite ice cream parlour, Moomaid of Zennor, gets several mentions, as does my favourite bookshop, St Ives Bookseller. Gwithian Beach and Godrevy Lighthouse are very special to my husband Bob and his family, so that’s why Seren, Jack and Nessie make the seaglass stars there. I visited St Ives four times while writing this book and a lot of the scenes were written on the actual beaches they take place on and sitting in café’s in Fore Street, where Seren’s dad’s gallery MacArthur’s is located. It’s my love letter to St Ives and I hope it makes readers fall in love with this incredible place, too!

Thanks so much for having me on your blog and for your lovely questions!

Miranda, thank you for being our guest today. It's been huge fun 😻

Here's what I thought about Somewhere Beyond the Sea..

This is such a lovely, lovely story that I was quite enchanted by Seren's and Jack's developing relationship and I found that I was eagerly looking forward to their individual stories which are told in alternate chapters, each giving a unique perspective into the way the story moves forward.

To say too much of what's going on in the whole of the story would be to give too much away and that would really spoil things. However, the difficulties that both Seren and Jack face feel all too real, especially Seren's financial worries over her arts and craft shop and the constant need to keep everything going well in order to honour her father's memory. Jack's obvious need to provide a secure future for himself and his young daughter, Nessie, adds a poignant, richness to the story, especially in Jack's dealings with the local people of St Ives as they fight to save one of their most cherished landmark buildings. It's safe to say that all the characters are brought to life in a really believable way, however, it was young Nessie, who stole my heart, she's quite simply adorable, wise beyond her years and such a force to be reckoned with that every time she appeared on the page she made smile.

Cornwall, in all its glory, comes beautifully alive so that I felt as if I walked the narrow streets of St Ives, or stopped to buy a strong coffee at Aggie's coffee hut on Porthgwidden Beach, but most of all I sat on on Gwithian Beach on the dawn of a spring morning and watched as Seren picked the most beautiful pieces of sea washed glass which are so much a part of this story.

Beautifully written with a strong story line and a stunning set of characters, Somewhere Beyond the Sea, is my perfect summer read. 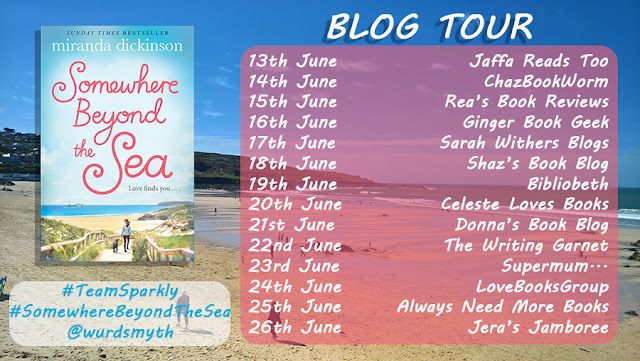