Jaffareadstoo is thrilled to be part of the Shelter Blog Tour

Spring 1944. Connie Granger arrives, alone, in the Forest of Dean. Fleeing her blitzed home and the war that’s fiercely raging on, she will train with the Women’s Timber Corps as a lumberjill. Deep in the heart of the forest, Connie’s duties will include felling, snedding, loading and crosscutting.

As she is drawn to the healing rhythms of the ancient forest and its remote local community – the forester and his wife, the shepherd, – Connie battles with the knowledge that she must soon make a life-changing decision.

Also arriving in the forest is Seppe, an Italian Prisoner of War, who is haunted by the past. Amongst the trees of the forest, he finds a strange kind of freedom and when Connie and Seppe cross paths in the forest, their meeting signals new beginnings. With the support of one another they will find the means to imagine their own lives anew and to face the fears that haunt them.

In this explosive moment of history, everything is changing. Women just like Connie – brave, uncompromising and strong – are finding opportunity and liberty like never before. But is the price Connie must pay for her freedom too great?

After a family tragedy, in the spring of 1944, Connie Granger leaves Coventry for the Forest of Dean in Gloucestershire, where she is to train as a lumberjill, one of a group of young women who are trained in forestry work. Meeting the government war quotas for timber is a hard task, but Connie finds that she has a remarkable skill for wood cutting which endears her to those who call the forest home.

Cutting trees is hard physical work and Connie is glad of the help of Seppe, a young Italian POW,  who is interned in a camp near to the forest, and who is coping with his imprisonment by turning to that he loves best, namely working with wood. Gradually a friendship develops, between Connie and Seppe, which will have far reaching consequences for both of them.

There's a real endearing quality to this story which, unlike most novels set in WW2, doesn't focus too heavily on what's happening in the wider picture of the war, and although there are interesting snippets about Seppe's family, which add some poignant background information, it is the story of the forest itself which really comes alive. The Forest of Dean, with its ancient woodland, and the foresters, who live and work within the boundaries of this ancient land, really help to give the book its heart and soul.

I thoroughly enjoyed reading Connie and Seppe's story and whilst I didn't always like Connie very much, I could understand why she acted in the way that she did, and felt that, both she, and Seppe were very much the product of war time. The idea finding of shelter is very much in evidence throughout the whole of the story and the author has done a good job in keeping this theme alive.

Sarah Franklin grew up in rural Gloucestershire. She lectures in publishing at Oxford Brookes, is the founder and host of Short Stories Aloud and a judge for the Costa Short Story Award. She has written for The Guardian, Psychologies, The Pool, Sunday Express. In 2014, Sarah was awarded a Jerwood/Arvon Mentorship on the strength of her opening pages of SHELTER, and worked on the novel for a year with Jenn Ashworth, amongst others. 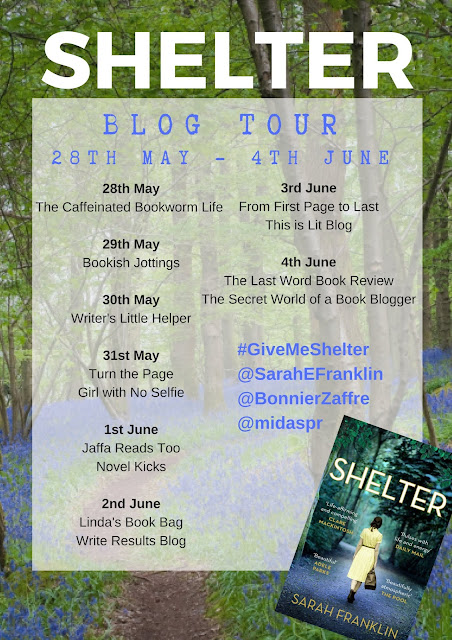