For many years Colette has avoided returning to her homeland - the magical island of Belle-Île-en-Mer in Southern Brittany - afraid to confront the painful memories she left behind. She is living on the Cornish coast when she hears about her mother Thea's failing health and realises that the time has come for her to go home. But can Colette ever forgive Thea for what she has done?

Despite Colette's wariness, romantic Belle-Île still fascinates her. She takes on the running of her mother's flower shop and makes friends with Élodie, from the Old Lighthouse where Thea once worked as a nanny, and with the enigmatic Étienne who shares Colette's mixed feelings about the island. As Thea opens up to her for the first time, Colette finds herself softening and being drawn back into the landscape of her past. But can Belle-Île also be a part of her future?

The ghosts of that past still linger. What happened all those years ago and how did it cause the rift between mother and daughter? It becomes clear that the beauty of Belle-Île hides a devastating family secret - one that Colette is determined to unravel at any cost.

Colette returns to her childhood home on Belle-Île-en-Mer in Southern Brittany, ostensibly, to look after her mother, Thea, who is terminally ill. This long postponed return brings back many memories for both Colette and her mother, as each of them have good reason to be wary of each other. Taking over the organisation of her mother's flower shop was never on Colette's agenda but as her mother starts to deteriorate so the languorous nature of the island begins to work its magic. Colette gets drawn deeper and deeper into a long buried secret which surrounds her mother's time on the island.

The author writes this multi-layered family drama really well and infuses such personality into her characters that you immediately start to care about what happens to them. I loved the gradual way the story unfolded so that when the secret is finally revealed, the characters have become so special that you really want everything to work out well for them all. I particularly looked forward to the different chapters as each was narrated by a different character who each have a very special role to play in the story.

Her Mother's Secret is such a strong character driven novel which really brings the story alive in the imagination and yet, it's not just about devastating family secrets, it's also a stunning tribute to Belle-Île-en-Mer and the people who call the place home. This is such a lovely summer read that I was quite enchanted by the story which is beautifully written by an author who really knows how to hold the reader in the palm of her hand.

Rosanna Ley works as a creative tutor and has written many articles and stories for national magazines. Her writing holidays and retreats take place in stunning locations in Spain and Italy. When she is not travelling, Rosanna lives in West Dorset by the sea. 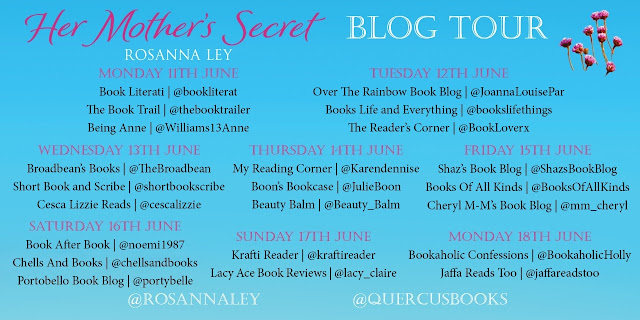