Autumn 1615. Celebrated couple Robert and Frances Carr are imprisoned in London on suspicion of murder.

SHE has been rescued from an abusive marriage by Robert, and is determined to make a new life for herself. Whatever the price …

HE has risen from nothing to become one of the country’s most powerful men. But to get to the top you cannot help making enemies …

Now a man is dead. And someone must pay with their life

Frances knows the truth can kill. Robert knows a lie can set you free. Neither understands their marriage is a poisoned bed …

Intrigue and treachery at the court of James I is rife, as it's a community built on lies and subterfuge, particularly amongst those who the King calls his 'favourites'. Robert Carr is one such favourite who holds a special place in the King's affection, that is, until Robert becomes besotted by the wily, and very beautiful, Frances Howard. Throughout the sixteenth century, the Howard family have never been far from scandal and controversy, and at the beginning of James I's reign, in the early seventeenth century, they are, once again, firmly ensconced at the very heart of court politics.

What then follows is the fictional account of the infamous scandal in which both Robert Carr and, by now, his wife, Frances Howard are implicated in the murder of Sir Thomas Overbury, a contemporary of Carr's, and a man with whom he shares many deadly secrets. The background to the events, which begin in 1615, with Carr and Howard’s imprisonment in the Tower of London, is told in their two very distinct voices, in which we get a fascinating interpretation, not just of the events which have led to the death of Thomas Overbury, but also of Frances’ early, and scandalous, marriage to Robert Devereux, 3rd Earl of Essex.

Walking in the footsteps of this infamous couple takes us into a deadly world of poisoners and their poisons, to shadowy places where dark spells and enchantments prosper, and to those hidden corners where unscrupulous people scheme and plot until get what they want.

Beautifully written and meticulously researched The Poison Bed is a fascinating story of murder, passion and politics at the very heart of the Jacobean court of King James I.

Elizabeth Fremantle is the critically acclaimed author of Queen's Gambit, Sisters of Treason, Watch the Lady and The Girl in the Glass Tower. She holds a First for her BA in English and an MA in Creative Writing from Birkbeck. She lives in London. 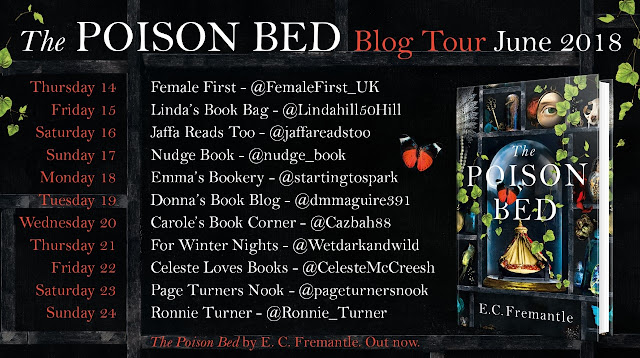