Whats it all about..

The first in a gripping series of crime novels set in the dark heart of St Petersburg, featuring sharp, yet compromised policewoman, Captain Natalya Ivanova.

Student Zena Dahl, the daughter of a Swedish millionaire, has gone missing in St Petersburg (or Piter as the city is colloquially known) after a night out with a friend.

Captain Natalya Ivanova is assigned the case, making a change for Natalya from her usual fare of domestic violence work, but, because of the family’s wealth, there’s pressure for a quick result. As she investigates she discovers that the case is not as straightforward as it may seem.

Dark, violent and insightful, MOTHERLAND twists and turns to a satisfyingly dramatic conclusion.

From Motherland’s extremely dramatic prologue, set in 1999, the action then moves forward to 2017, to the Russia of Vladimir Putin, and to the corrupt police department in St Petersburg, or Piter as it is known colloquially by its inhabitants. Captain Natalya Ivanova, a police detective working in the serious crime unit of the Criminal Investigations Directorate, is given the task of searching for a missing teenager, whose wealthy Swedish father seems rather uncommunicative, preferring to liaise with the police via his assistant, rather than step foot on Russian soil.

The mystery at the heart of the story works well and there are lots of twists and turns and several red herrings before the final dramatic dénouement is revealed. Time and place come alive and there is a distinct feeling of secrecy and corruption taking place, not just at the highest level, but also amongst the rank and file of the police department. I don’t often read police procedural novels set in such a rich and vibrant culture but I was genuinely pleased, once I got used to the Russian names, at just how quickly the characters started to come alive in my imagination. I really liked Natalya Ivanova, she’s a gutsy and determined protagonist, frequently frustrated by her male counterparts and constantly restricted by the prejudice of a law enforcement system which has little regard for its female employees. Even Natalya’s husband, Mikhail, who I’m afraid I didn’t like very much, has more than his share of secrets. Interestingly, Natalya’s domestic arrangements form a fascinating part of the story, which sets the scene really nicely for further exploration of her home life in future novels.

Motherland is the first book in a new crime series starring Natalya Ivanova and this first thrilling adventure certainly gets the series off to an exciting start.

I can’t wait to see what happens next for Captain Natalya Ivanova.

G. D. ABSON works as a freelance business analyst and lives in the South West of England. He has cultivated contacts in the St Petersburg police force in order to write this novel, and has more Natalya Ivanova crime novels planned. 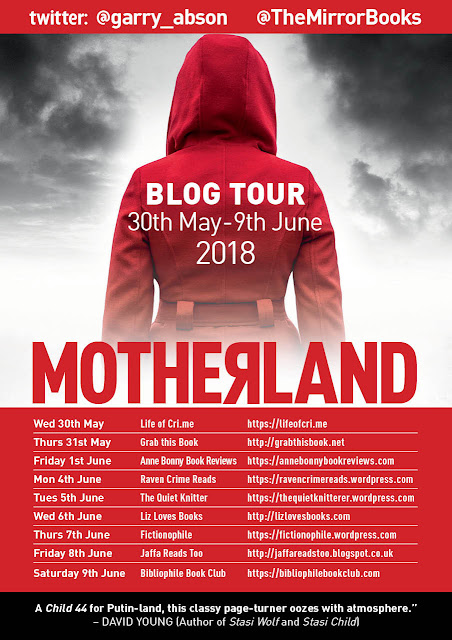