Blog Tour ~ One Summer in Italy by Sue Moorcroft

When Sofia Bianchi’s father Aldo dies, it makes her stop and look at things afresh. Having been his carer for so many years, she knows it’s time for her to live her own life – and to fulfil some promises she made to Aldo in his final days.

So there’s nothing for it but to escape to Italy’s Umbrian mountains where, tucked away in a sleepy Italian village, lie plenty of family secrets waiting to be discovered. There, Sofia also finds Amy who is desperately trying to find her way in life after discovering her dad isn’t her biological father.

Sofia sets about helping Amy through this difficult time, but it’s the handsome Levi who proves to be the biggest distraction for Sofia, as her new life starts to take off…

When her beloved father dies, Sofia Bianchi leaves England and travels to Montelibertà, a small Italian town tucked away in the Umbrian mountains, where her father grew up. There Sofia finds work as a waitress at Casa Felice, a family run hotel, where she befriends, Amy, a young girl who is also working as a waitress. Sofia discovers that Amy has recently left her home in Germany in order to come to terms with the discovery of a devastating family secret. And as the friendship between the two girls develops so their life at the hotel becomes entwined, especially when Levi, a handsome hotel guest, starts to feature more strongly in the story.

One Summer in Italy is a truly delightful read with a glorious setting and seemingly endless days filled with sunshine. Beautifully written and peopled with the most glorious characters who warm your heart, and who make it an absolute joy to follow where the story takes you. Sofia with her steely determination and heart of gold, Amy's angst ridden attitude and oh, so handsome Levi, with his Ducati Diavel, really make the story come alive, so that it becomes increasingly difficult to put down the book for much longer than it takes to pour another glass of Orvieto Classico, Sofia's favourite drink. There are some lovely light moments which made me smile and a really delightful portrayal of how not to run a hotel in the style of Benedetta and her odious son, Davide, whose wandering hands made me want to hit him over the head with a tea tray.

There is so much to enjoy in One Summer in Italy, not just because of the delicious frisson of romance, which runs like a ray of sunshine throughout the story, but also because of the sensitive portrayal of  the role of fathers, and their daughters, and of how family secrets, so long buried, can have far reaching consequences.

Sofia Bianchi's dying father tells her to 'Be happy, Sofia, be happy' and thanks to the skilful story telling of this talented author, reading One Summer in Italy certainly made me very happy indeed. 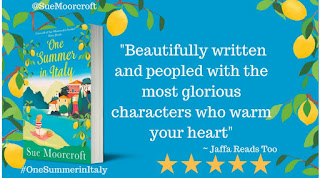 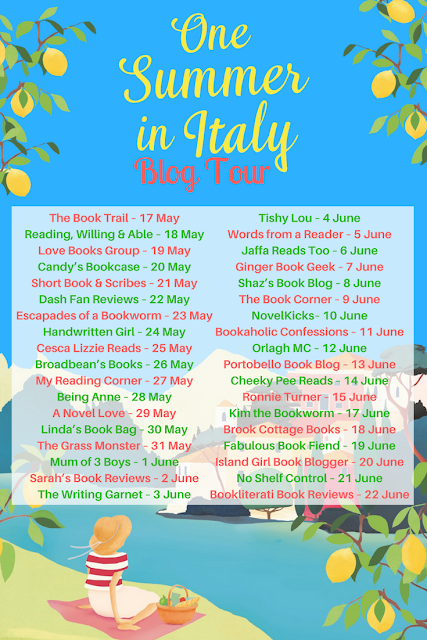