Blog Tour ~ What Kitty Did Next by Carrie Kablean

England, 1813 – Nineteen-year-old Catherine Bennet lives in the shadow of her two eldest sisters, Elizabeth and Jane, who have both made excellent marriages. No one expects Kitty to amount to anything. Left at home in rural Hertfordshire with her neurotic and nagging mother, and a father who derides her as ‘silly and ignorant’, Kitty is lonely, diffident and at a loss as to how to improve her situation. When her world unexpectedly expands to London and the Darcy’s magnificent country estate in Derbyshire, she is overjoyed. Keen to impress this new society, and to change her family’s prejudice, Kitty does everything she can to improve her mind and manners – and for the first time feels liked and respected. However, one fateful night at Pemberley, a series of events and misunderstandings conspire to ruin Kitty’s reputation. Accused of theft –a crime worse almost worse than murder among the Georgian aristocracy – she is sent back home in disgrace. But Kitty has learnt from her new experiences and what she does next does next will not only surprise herself, but everyone else too.

Based on Jane Austen's much-loved characters, this is the story of one young woman’s struggle to overcome the obstacles of her time and place and truly find herself.

It always fascinates me that such is the appeal of Jane Austen's great novel, Pride and Prejudice that so many authors attempt, in their own way, to continue the story. Some succeed and some don't and I'm pleased to say that What Kitty Did Next worked for me.

I've always felt really sorry for Kitty Bennet, so often overshadowed by her more high spirited sisters, she always seemed to be derided as silly Kitty, so it’s been really lovely to see her have her own exciting story where her personality is allowed to shine just as brightly as her feisty older sisters.

The author writes well and certainly captures the essence of Pride and Prejudice whilst at the same time allowing a new and fascinating story to unfold. There are the usual quirky moments at home, at Longbourn, as with three of her sisters now married and settled, poor Kitty is left at home with the irascible, Mr. Bennet, and with Mrs Bennet still confounded by her nerves and intent on match making, Kitty is delighted when she receives an invitation to London to stay with the Bingleys and then to Derbyshire and the magnificent Pemberley estate.

What then follows is a lovely coming of age story which is really quite charming and which captures the spirit of this iconic novel with good humour and a fine eye for historical detail. I enjoyed watching Kitty grow in confidence and maturity and as the title of the novel suggests, discovering just what Kitty does next makes for a really lovely Austenesque spin-off.

Carrie Kablean began her career in London, where she was born, and now lives in Australia. Arriving in Sydney in 1990 (via eight years in Papua New Guinea, during which time she edited the local newspaper on Bougainville), she was with The Australian newspaper for more than 20 years, and was, concurrently, a theatre critic for the Sunday Telegraph. 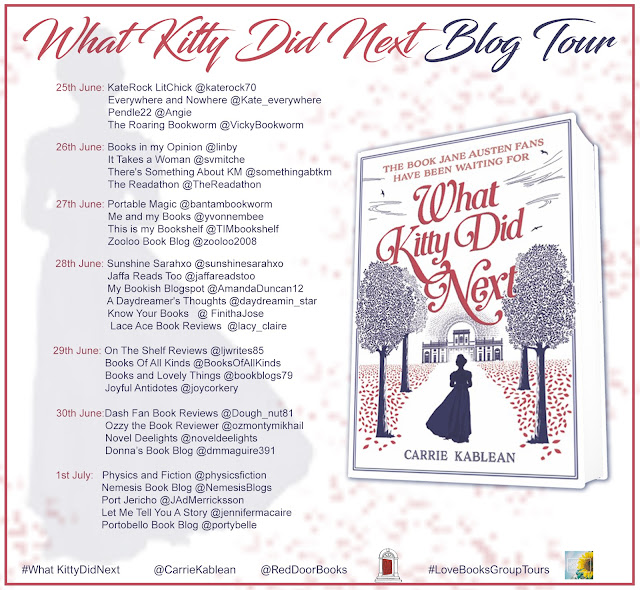